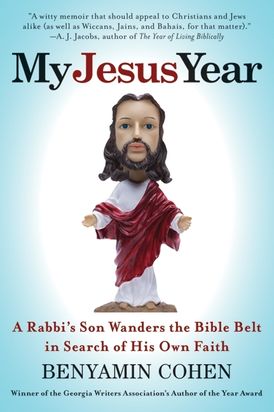 Part memoir, part spiritual quest, part anthropologist’s mission, Benyamin Cohen’s My Jesus Year is a humorous, personal, ultimately inspirational exploration of Evangelical Christianity by the son of an Orthodox Rabbi on his journey through America's Bible belt. Winner of the Georgia Writer Association’s Georgia Author of the Year Award, selected by Publishers Weekly as one of the Best Books of the Year and by USA Today as one of the Top Eight Books to Help Rekindle the Hanukkah Spirit, My Jesus Year is an unorthodox and unforgettable search for universal answers and common truths.

“Cohen spends a year on a fascinating and thought-provoking inter-faith exploration. The resulting witty memoir should appeal to Christians and Jews alike (as well as Wiccans, Jains and Bahais, for that matter).” - A.J. Jacobs, author of The Know-It-All and The Year of Living Biblically

“Cohen’s witty and trenchant observations on identity and interfaith relations are like an early Christmukkah present.” - Rob Kutner, author and writer for The Daily Show with Jon Stewart

“A delicious olio of guilt, longing, surprise, wonder, unease and of course humor, Cohen’s quest has universal appeal. One need not be Jewish, Christian or even a seeker to enjoy this wonderful loop around the Bible Belt.” - Publishers Weekly (starred review)

“Cohen writes that what he learned from the year’s spiritual journey was that there are many paths people take to find faith in God and there are more similarities than differences in various religions. “Hanging out with Jesus has made me a better Jew,” he writes. Amen to that.” - Booklist

“My Jesus Year stirs together keen-eyed journalism and a spiritual quest to create a book that can be read both for its heartfelt examination of one man’s religous faith and as a revelatory tour of the landscape of Christian life in the U.S. today. ” - Shelf Awareness

“Cohen is an engaging writer and his book is very well worth reading.” - The Jewish Voice and Opinion

“This is the story of how Cohen got his Jew back.” - The Atlanta Jewish Times Online

“This hysterical book is literally one of those ‘laugh out loud’ books that can be imitated, but never duplicated.” - The Atlanta Jewish Times Online

“Cohen’s experiences have been quite different from mine, but the life lesson -- that Christians and Jews can learn a lot about their own faiths from the other -- is the same.” - The Jewish Journal

“If there’s a prodigal son on your Hanukkah gift list, Cohen’s book, subtitled, ‘A rabbi’s son wanders the Bible Belt in search of his own faith,’ could be the book to get.” - USA Today

“Cohen’s experiences were certainly different from mine, but the life lesson—that there is a lot Christians and Jews can learn about themselves from the other—was the same.” - Christianity Today

“Orthodox Jews who have gotten past the cover with the “J” word on it have read the book and recommended it to fellow members of the tribe.” - The Jerusalem Post

“Cohen is a Jack Kerouac searching for a way back to his own faith on the Bible Belt’s gospel road.” - Atlanta Journal-Constitution 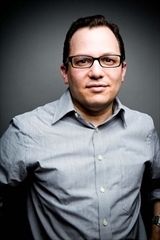 Benyamin Cohen is the son of an Orthodox rabbi who married a Methodist minister's daughter who converted to Judaism. He was the founder and editor of the award-winning national magazine American Jewish Life and the online magazine Jewsweek, and is currently an editor at the Mother Nature Network.

Other Works by Benyamin Cohen