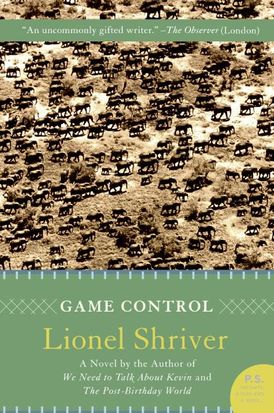 Set against the vivid backdrop of modern-day Africa—a continent now primarily populated with wildlife of the two-legged sort—Lionel Shriver's Game Control is a wry, grimly comic tale of bad ideas and good intentions.

Eleanor Merritt, a do-gooding American family-planning worker, was drawn to Kenya to improve the lot of the poor. Unnervingly, she finds herself falling in love with the beguiling Calvin Piper despite, or perhaps because of, his misanthropic theories about population control and the future of the human race. Surely, Calvin whispers seductively in Eleanor's ear, if the poor are a responsibility they are also an imposition.

With a deft, droll touch, Shriver highlights the hypocrisy of lofty intellectuals who would "save" humanity but who don't like people.

“One of the best works of fiction about Africa I’ve ever read.” — The New Statesman

“Lionel Shriver has written a sardonic, sexy, salutary novel about, of all things, population control.” — The New Scientist

“Shriver steers her plot through some truly outrageous argument. But her work is all the more valuable for its flagrant defiance of political correctness...the controversy that consumes [the story] is compelling.” — The Times (London)

“Every now and then a modern novel about Africa comes along that neither trades on the continent as ‘exotica’ nor piously makes literary capital out of human misery—that doesn’t go woozy at the sight of a wildebeest, that might be more cruel than caring, but in fact isn’t. John Updike’s The Coup was one such, as was Paul Theroux’s Jungle Lovers; Lionel Shriver, an American woman already praised for Ordinary Decent Criminals, has produced another.” — Times Literary Supplement