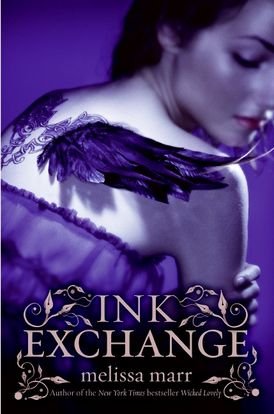 Unbeknownst to mortals, a power struggle is unfolding in a world of shadows and danger. After centuries of stability, the balance among the Faery Courts has altered, and Irial, ruler of the Dark Court, is battling to hold his rebellious and newly vulnerable fey together. If he fails, bloodshed and brutality will follow.

Seventeen-year-old Leslie knows nothing of faeries or their intrigues. When she is attracted to an eerily beautiful tattoo of eyes and wings, all she knows is that she has to have it, convinced it is a tangible symbol of changes she desperately craves for her own life.

The tattoo does bring changes—not the kind Leslie has dreamed of, but sinister, compelling changes that are more than symbolic. Those changes will bind Leslie and Irial together, drawing Leslie deeper and deeper into the faery world, unable to resist its allures, and helpless to withstand its perils. . .

“Compulsive enough to give the Twilight series a run for its money.” — Publishers Weekly (starred review)

“Another highly addictive read...Compulsive enough to give the Twilight series a run for its money, and dizzyingly more sinister.” — Publishers Weekly (starred review)

“Newcomers and returning readers alike will devour this companion novel to Marr’s ragingly popular Wicked Lovely . . . . This dark fantasy about survival and transformation is as mesmerizing as its urban faery subjects.” — Booklist

“Readers will be drawn in by Marr’s darkly poetic imagery and language, her vivid portrayal of the art of tattooing, and her shadowy love triangle. This is indeed a delicious, smoky delight.” — Bulletin of the Center for Children’s Books

“As the sequel to Wicked Lovely, Ink Exchange is even more compelling. Their [the characters’] fierce, sometimes despairing search for their true selves gives Ink Exchange its sinister power.” — Washington Post Book World

“This dark fantasy about survival and transformation is as mesmerizing as its urban faery subjects.” — Booklist

“A delicious, smoky delight.” — Bulletin of the Center for Children’s Books