Under a Green Sky

Global Warming, the Mass Extinctions of the Past, and What They Can Tell Us About Our Future 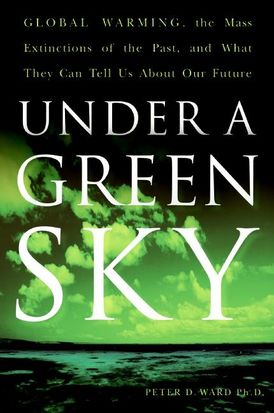 Under a Green Sky

Global Warming, the Mass Extinctions of the Past, and What They Can Tell Us About Our Future

More than 200 million years ago, a cataclysmic event known as the Permian extinction destroyed more than 90% of all species and nearly 97% of all living things. Its origins have long been a puzzle for paleontologists, and during the 1990s and the early part of this century a great battle was fought between those who thought that death had come from above and those who thought something more complicated was at work.

Paleontologist Peter D. Ward, fresh from helping prove that an asteroid had killed the dinosaurs, turned to the Permian problem, and he has come to a stunning conclusion. In his investigations of the fates of several groups of mollusks during those extinctions and others, he discovered that the near-total devastation at the end of the Permian was caused by rising levels of carbon dioxide leading to climate change. But it's not the heat (nor the humidity) that's directly responsible for the extinctions, and the story of the discovery of what is responsible makes for an fascinating, globe-spanning adventure.

“A sobering and valuable perspective . . .” — Science

Dr. Peter D. Ward is a professor of biology and earth and space sciences at the University of Washington in Seattle. He also serves as an astrobiologist with NASA. Ward is the author of more than a dozen books, including the highly acclaimed Rare Earth: Why Complex Life Is Uncommon in the Universe with Donald Brownlee and Out of Thin Air: Dinosaurs, Birds, and Earth's Ancient Atmosphere.

Other Works by Peter D. Ward