Don't Know Much About® Mythology 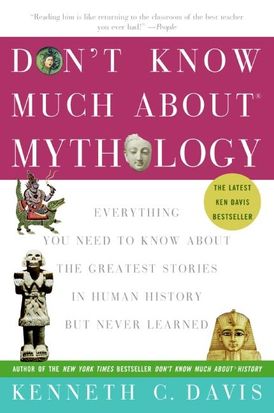 Don't Know Much About® Mythology

In this fascinating installment of the New York Times bestselling Don’t Know Much About® series, Kenneth C. Davis explores the great myths of the world and their implications for art, science, religion and culture throughout history.

What is an Egyptian pyramid doing on the U. S. dollar bill? • Did a pharaoh inspire Moses to worship one God? • What’s a Canaanite demoness doing at a rock concert?

Since the beginning of time, people have been insatiably curious. They’ve asked questions about where we come from, why the stars shine and the seasons change, and what constitutes evil. The imaginative answers crafted by our ancestors have served as religion, science, philosophy, and popular literature.

In an engaging and delightfully irreverent question-and-answer style, Davis tackles the epic of Gilgamesh; Achilles and the Trojan War; Stonehenge and the Druids; Odin, Thor, and the entire Norse pantheon; Native American myths, and much more, including the dramatic life and times of the man who would be Buddha. From Mount Olympus to Machu Picchu, here is an insightful, lively look at the greatest stories ever told.

“Ken Davis is the high school teacher we all wish we’d had—smart, funny, and irreverent. Don’t Know Much About Mythology is a crystalized reminder of what’s enduring about the past, and why it continues to matter today. It’s a perfect companion to Harry Potter, The DaVinci Code, and the Bible—and the best excuse I know to get deserted on a Greek island. Between Odysseus and Icarus, it might even give you a few clues for how to find your way home—and how not to.” — Bruce Feiler, author of Walking the Bible

“Davis ranges widely and with such sparkling wit. . . a superb starting point for entering the world of mythology.” — Publishers Weekly (starred review)

“Davis is clearly the owner of a questing mind....An accessible and informed guide to an always-fascinating subject.” — Kirkus Reviews

“With his trademark wit and fiercely entertaining style, Kenneth Davis draws us into mythological worlds, preserving ancient mysteries and enchantments even as he clarifies, orders, and makes sure we have the stories straight. Don’t Know Much About Mythology frames questions that arouse curiosity and produces answers that lead to astonishment. Whether you want a crash course on North American native myths or a refresher course on Gilgamesh, this book will provide a great read and remain a permanent reference manual.” — Dr. Maria Tatar, Department of Folklore and Mythology, Harvard University, author of The Annotated Brothers Grimm

“Who are we? In his thoughtful and entertaining Don’t Know Much about Mythology, Kenneth C. Davis suggests that in large part, we are a product of our own creation, our best instincts and worst prejudices—reflected in the stories we tell. We have become our myths, Davis suggests, though they are not necessarily true. In the Americas, myths justified slavery and the destruction of native societies. Yet myth can empower, pulling us upward toward greater creativity and humanity. For all who chose to know just who we are, you must read this book.” — Richard M. Cohen, author of Blindsided

“A massive overview of every myth under the sun. Davis shatters commonly held myths about myths.” — Daily News

“Over the long development of human culture, the stories of Mythology are like a chronology of human evolution. They tell us who who we are, and hint at the answer to the growing spiritual intolerance we see today: at the level of the soul, we all want the same things. In Don’t Know Much About Mythology, Kenneth C. Davis illuminates these ideas in a popular and entertaining way. I highly recommend this book.” — James Redfield, author of The Celestine Prophecy

Kenneth C. Davis is the New York Times bestselling author of A Nation Rising; America's Hidden History; and Don't Know Much About® History, which spent thirty-five consecutive weeks on the New York Times bestseller list, sold more than 1.7 million copies, and gave rise to his phenomenal Don't Know Much About® series for adults and children. A resident of New York City and Dorset, Vermont, Davis frequently appears on national television and radio and has been a commentator on NPR's All Things Considered. He blogs regularly at www.dontknowmuch.com.

Other Works by Kenneth C. Davis

Don't Know Much About® the Universe

Don't Know Much About American History

Don't Know Much About® Literature

Don't Know Much About the Solar System

Don't Know Much About® the Civil War

Don't Know Much About® Anything Else

Don't Know Much About® the Bible

Don't Know Much About the 50 States