Karma and Other Stories 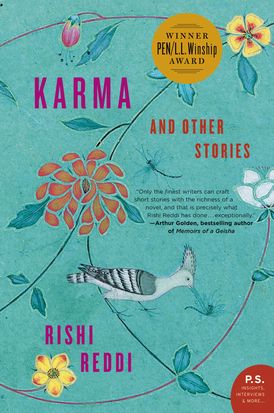 Karma and Other Stories

In this sparkling collection, award-winning writer Rishi Reddi weaves a multigenerational tapestry of interconnected lives, depicting members of an Indian American community struggling to balance the demands of tradition with the allure of Western life.

In "Lord Krishna," a teenager is offended when his evangelical history teacher likens the Hindu deity to Satan, but ultimately forgives the teacher against his father's wishes. In the title story, "Karma," an unemployed professor rescues birds in downtown Boston after his wealthy brother kicks him out of his home. In "Justice Shiva Ram Murthy," which appeared in The Best American Short Stories 2005, an irascible retired judge reconnects with a childhood friend while adjusting to a new life with his daughter and her American husband. In "Devadasi," a beautiful young woman raised in the United States travels back to India and challenges the sexual confines of her culture. And in "Bangles," a widow decides to return to her native village to flee her son's off-putting American ways.

Set mostly in the Boston area, with side trips to an isolated immigrant community in Wichita, Kansas, and the characters' hometown of Hyderabad, India, Karma and Other Stories introduces a luminous new voice.

“Reddi’s understated prose and her choice of detail give her revelations a quiet power.” - The New Yorker

“While many of the stories seem simple, characters and plots linger long after you turn the page.” - Washington Post

“Reddi has produced a piece of writing that masterfully contrasts the assumed with the experienced, myth with reality.” - India Currents

“In deceptively simple prose...a compassionate look at what happens when the insular world of the Indian immigrant is breached.” - St. Louis Post-Dispatch

“This excellent debut collection... [offers] elegant studies of a culture that is both familiar and foreign.” - Booklist

“Only the finest writers can craft short stories with the richness of a novel...[an] exceptional debut collection.” - Arthur Golden, bestselling author of MEMOIRS OF A GEISHA

“Rishi Reddi has written a unique and beautiful book with the power to both entertain and educate.” - Judith Guest, bestselling author of ORDINARY PEOPLE

“Reddi’s characters are complicated people...and, as are the stories they inhabit, memorable and very worthy of our attention. Exquisite.” - Binnie Kirshenbaum, author of AN ALMOST PERFECT MOMENT 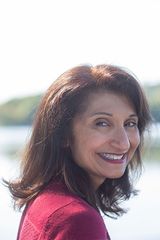 Rishi Reddi is the author of the collection Karma and Other Stories, which received the 2008 L. L. Winship/PEN New England Award for fiction. Her work appears in Best American Short Stories, has been broadcast on National Public Radio, and was chosen for honorable mention in the Pushcart Prize. She was born in Hyderabad, India, and grew up in Great Britain and the United States. She lives in Cambridge, MA.

Other Works by Rishi Reddi