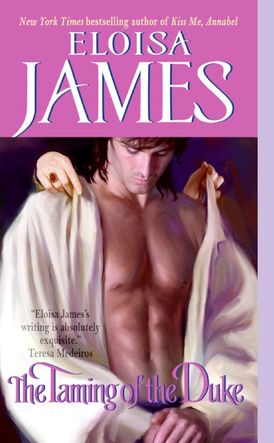 Imogen, Lady Maitland, has decided to dance on the wild side. After all, she's in the delicious position of being able to take a lover. A discreet male who knows just when to leave in the morning.

But Lady Maitland is still under the watchful eye of her former guardian, the wildly untamed Rafe, the Duke of Holbrook. He believes she is still in need of a "watchdog." She laughs at the idea that someone so insufferably lazy and devoted to drink can demand that she behave with propriety.

It's Rafe's long-lost brother, a man who looks precisely like the duke but with none of his degenerate edge, who interests Imogen. To Imogen, he's the shadow duke . . . the man who really should hold the title. But when Imogen agrees to accompany Gabe to a masquerade...whose masked eyes watch her with that intense look of desire? Who exactly is she dancing with? The duke or the shadow duke? Rafe . . . or Gabe?

Eloisa James is a professor of English literature, specializing in Shakespeare. She teaches at Fordham University in New York City, and lives in New Jersey. Oxford University Press published her academic book in 2000. Eloisa's books have been translated into Dutch, Russian, German, Polish, French and Spanish. She is the daughter of poet Robert Bly (winner of the American Book Award for Poetry) and short story author Carol Bly. Eloisa’s godfather was the poet James Wright, winner of the Pulitzer Prize for his Collected Poems. Among those poems – and one of Wright's most beloved – is a poem written for his goddaughter, Mary Bly (aka Eloisa James).

Once Upon a Tower

The One That Got Away

The Lady Most Likely...