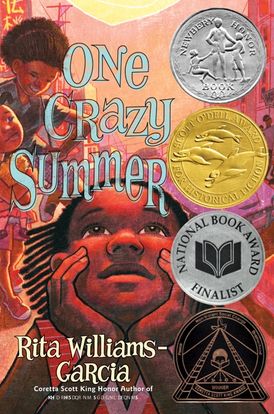 In this Newbery Honor novel, New York Times bestselling author Rita Williams-Garcia tells the story of three sisters who travel to Oakland, California, in 1968 to meet the mother who abandoned them. A strong option for summer reading—take this book along on a family road trip or enjoy it at home.

This moving, funny novel won the Scott O'Dell Award for Historical Fiction and the Coretta Scott King Award and was a National Book Award Finalist. Delphine, Vonetta, and Fern's story continues in P.S. Be Eleven and Gone Crazy in Alabama.

Readers who enjoy Christopher Paul Curtis's The Watsons Go to Birmingham and Jacqueline Woodson’s Brown Girl Dreaming will find much to love in One Crazy Summer. Rita Williams-Garcia's books about Delphine, Vonetta, and Fern can also be read alongside nonfiction explorations of American history such as Jason Reynolds's and Ibram X. Kendi's books.

In One Crazy Summer, eleven-year-old Delphine is like a mother to her two younger sisters, Vonetta and Fern. She's had to be, ever since their mother, Cecile, left them seven years ago for a radical new life in California. But when the sisters arrive from Brooklyn to spend the summer with their mother, Cecile is nothing like they imagined.

While the girls hope to go to Disneyland and meet Tinker Bell, their mother sends them to a day camp run by the Black Panthers. Unexpectedly, Delphine, Vonetta, and Fern learn much about their family, their country, and themselves during one truly crazy summer.

This novel was the first featured title for Marley D’s Reading Party, launched after the success of #1000BlackGirlBooks. Maria Russo, in a New York Times list of "great kids' books with diverse characters," called it "witty and original."

"This vibrant and moving award-winning novel has heart to spare," commented Olugbemisola Rhuday-Perkovich in her Brightly article "Knowing Our History to Build a Brighter Future: Books to Help Kids Understand the Fight for Racial Equality."

★ “Delphine is the pitch-perfect older sister, wise beyond her years, an expert at handling her siblings...while the girls are caught up in the difficulties of adults, their resilience is celebrated and energetically told with writing that snaps off the page.” — Kirkus Reviews (starred review)

★ “Regimented, responsible, strong-willed Delphine narrates in an unforgettable voice, but each of the sisters emerges as a distinct, memorable character, whose hard-won, tenuous connections with their mother build to an aching, triumphant conclusion.” — Booklist (starred review)

★ “The setting and time period are as vividly realized as the characters, and readers will want to know more about Delphine and her sisters after they return to Brooklyn.” — Horn Book (starred review)

★ “Emotionally challenging and beautifully written, this book immerses readers in a time and place and raises difficult questions of cultural and ethnic identity and personal responsibility. With memorable characters (all three girls have engaging, strong voices) and a powerful story, this is a book well worth reading and rereading.” — School Library Journal (starred review)

“Delphine’s growing awareness of injustice on a personal and universal level is smoothly woven into the story in poetic language that will stimulate and move readers.” — Publishers Weekly

“In One Crazy Summer Williams-Garcia presents a child’s-eye view of the Black Panther movement within a powerful and affecting story of sisterhood and motherhood.” — Monica Edinger, The New York Times

“One Crazy Summer absolutely blew me away. What an amazing and beautifully written story. This novel is just glorious.” — Jacqueline Woodson, author of the Newbery Honor Book After Tupac & D Foster