World War II, Escape, and a House in Marseille 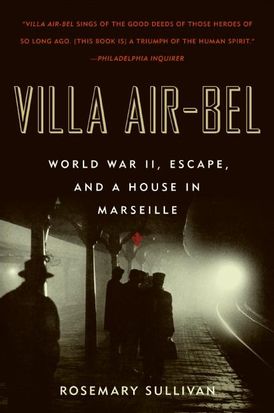 World War II, Escape, and a House in Marseille

“Rosemary Sullivan goes beyond the confines of Air-Bel to tell a fuller story of France during the tense years from 1933 to 1941. . . . A moving tale of great sacrifice in tumultuous times.” — Publishers Weekly

Paris 1940. Andre Breton, Max Ernst, Marc Chagall, Consuelo de Saint-Exupery, and scores of other cultural elite denounced as enemies of the conquering Third Reich, live in daily fear of arrest, deportation, and death. Their only salvation is the Villa Air-Bel, a chateau outside Marseille where a group of young people, financed by a private American relief organization, will go to extraordinary lengths to keep them alive. In Villa Air-Bel, Rosemary Sullivan sheds light on this suspenseful, dramatic, and intriguing story, introducing the brave men and women who use every means possible to stave off the Nazis and the Vichy officials, and goes inside the chateau’s walls to uncover the private worlds and the web of relationships its remarkable inhabitants developed.

“There was an atmosphere of jittery uncertainty and apprehension that Canadian writer Rosemary Sullivan captures to chilling effect in ’Villa Air-Bel.’ … Sullivan, a poet and professor of English at the University of Toronto, centers her moving and richly detailed account of that time of anxiety at the villa, which was, she writes, like ‘a stone interrupting the stream,’ a fixed point in a dangerous world.” — Boston Globe

According to Rosemary Sullivan’s gripping new book, ‘Villa Air-Bel,’ France had become ‘a country trapped in the totalitarian vise of irrational hatred’ with its own government as terrifying as the Nazis….Another hero is the Villa Air-Bel itself, a run-down 18-room mansion in the suburbs of Marseille…Her description of the resident’s attempts at establishing a normal life there—the meals, the improvised games, the passionate discussions—are the heart of this book. — San Francisco Chronicle

“[Rosemary Sullivan] goes beyond the confines of Air-Bel to tell a fuller story of France during the tense years from 1933 to 1941. She intelligently spreads the fractured narrative, with its huge cast of players constantly coming and going, over 60 brief chapters. What’s palpable is the welter of shock, fear, world-weariness, cynicism and misplaced idealism evinced by the villa’s transient residents as they apprehensively awaited their fate…a moving tale of great sacrifice in tumultuous times.” — Publishers Weekly

“[Villa Air-Bel] bring[s] to life those committed Americans and Europeans who risked all to help others...A complex tale showing how hope and courage flourish, even in the toxic soil of totalitarianism.” — Kirkus Reviews

“Beautifully written in a style that is novelistic, Villa Air-Bel brings to life the story of this rescue through experiences of a community of artists who spent time in the Villa Air-Bel chateau…The book is interesting and evocative and provides nuances and texture to one of the untold stories of rescue during the Holocaust.” — Jewish Book World

“With tremendous suspense and emotional pull, Sullivan recounts the little-known story of Varian Fry, the intrepid young American who sheltered [dozens of artists and intellectuals] helping them and hundreds more escape from Vichy France.” — Vogue

“The great virtue of Sullivan’s account of these dark times is the meticulous research that informs it, the uncovering of memoirs, photos, and other documents in numerous Canadian and American libraries as well as archives in France and private collections….Sullivan’s Villa Air-Bel sings of the good deeds of those heroes of so long ago. It memorializes the great men and women of the rescue team who were bastions of humanity in a time of man’s most shameful display of sadistic cruelty. Villa Air-Bel is a most welcome book, a triumph of the human spirit.” — Philadelphia Inquirer

“Villa Air-Bel is a most welcome book, a triumph of the human spirit.” — Philadelphia Inquirer

“Gripping...Sullivan captures the tense atmosphere of France as the Germans invaded and the fear and anxiety of the intellectuals, some held in detention camps and some who ignored the danger until it was nearly too late.” — Booklist

“Sullivan has written a book of great detail and complexity, though one that is full of darkness.” — Quill & Quire

“[Sullivan] crafts that intense bond between the reader and her subject.” — The Globe and Mail

“This is a magnificent, complex narrative of courage, folly, and complacency...a beautifully narrated book.” — Telegraph

“Rosemary Sullivan’s Villa Air-Bel is a marvellous addition to the surging literature on occupied France. Sullivan writes not as a historian-she has little new material-but as a dramatist.Her scene-by-scene evocation of life at the house reads like an updated Chekhov comedy laced with horror.” — Financial Times

“Her scene-by-scene evocation of life at the house reads like an updated Chekhov comedy laced with horror.” — Financial Times

“[In Villa Air-Bel] stories are told with passion.” — The Advocate

“Sullivan brilliantly interweaves personal histories with terrifying tales about flight over mountains to Spain or Switzerland and by sea to Casablanca or Martinique….At the centre is Varian Fry, the quiet American.” — Sunday Times (London)

“As a piece of narrative Villa Air-Bel is considerable. It tells a number of individual stories-about 40-brilliantly and it places them in context. Furthermore, as one would expect, the style is beautifully clear and concise. It also illuminates a little known but important aspect of the history of the second World War….Sullivan’s book should be mandatory reading.” — Irish Times

“Sullivan’s latest book covers a little-known chapter in the history of the Second World War….Villa Air-Bel is a remarkable achievement.” — National Post (Toronto)

“[Sullivan] manages to combine solid scholarship with a snappy writing style, and this makes for a history book that is completely riveting….Villa Air-Bel is a valiant effort to explore and emphasize…the lessons of history.” — Vancouver Sun

“The intermingling of these bright minds could have been the stuff of fiction, and, in the high point of the book, Sullivan vividly portrays life in the countryside…Fry’s comrades are the meat of Sullivan’s story, and short chapters facilitate deft handling of a twisted plot with a large number of characters.” — The Forward