After the Flag Has Been Folded 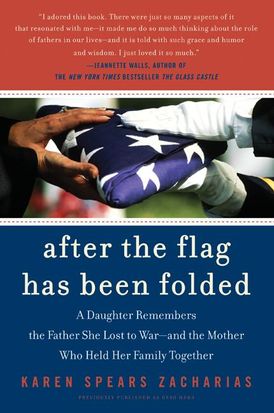 After the Flag Has Been Folded

Karen Spears was nine years old, living with her family in a trailer in rural Tennessee, when her father, David Spears, was killed in the Ia Drang Valley in Vietnam. It was 1966—in a nation being torn apart by a war nobody wanted, in an emotionally charged Southern landscape stained with racism and bigotry—and suddenly the care and well-being of three small children were solely in the hands of a frightened young widow with no skills and a ninth-grade education. But thanks to a mother's remarkable courage, strength, and stubborn tenacity, a family in the midst of chaos and in severe crisis miraculously pulled together to achieve its own version of the American Dream.

Beginning on the day Karen learns of her father's death and ending thirty years later with her pilgrimage to the battlefield where he died, half a world away from the family's hometown, After the Flag Has Been Folded is a triumphant tale of reconciliation between a daughter and her father, a daughter and her nation—and a poignant remembrance of a mother's love and heroism.

“One of the most original, heartbreaking and off-the-nose books about the Vietnam experience ever written . . . brilliant” — Pat Conroy

“A beautiful and important book . . . Hero Mama will stay with me always.” — Silas House, Author of Clay's Quilt and The Coal Tatoo

“Touch[es] the hearts of families who have dealt with death, even if the death wasn’t caused by war.” — Las Vegas Review-Journal

“An important and triumphant work of literature, a must read for every American in another time of war.” — Military.com

Karen Spears Zacharias  >is an author/journalist, and Gold Star daughter whose father was killed in Vietna >. Her work has been featured in  >the New York Times, Washington Post, CNN, NPR, Huffington Post and Newsweek > She was named 2018 West Virginia's Appalachian Heritage  >Writer by Shepherd University and West Virginia's Center for the Book. Karen's debut novel, Mother of Rain, was awarded the Weatherford for Best in Appalachian by Kentucky's Berea College. Karen >as served on the national advisory boards for >he Vietnam Women' > Memorial Fund and the Vietnam Memorial Wall Foundation.  >She lives in Deschutes County, Oregon, with her dog Hemingway, and volunteers with programs designed to help veterans and Gold Star familie >  She can be reached at KarenZach.com.

Other Works by Karen Spears Zacharias