Eric Rudolph and the Legacy of American Terror 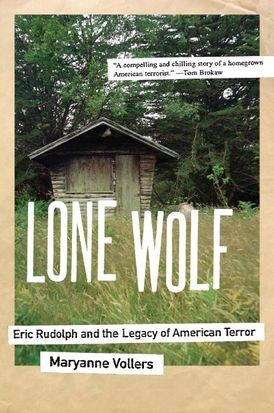 Eric Rudolph and the Legacy of American Terror

Five years after escaping into the mountains of North Carolina, Eric Rudolph was becoming a figure of folk legend. The FBI had long since abandoned its manhunt—the largest ever on U.S. soil—for the fugitive accused of bombing the Atlanta Olympics, two abortion clinics, and a gay bar. Then, one night, Rudolph got careless; he was arrested and put in jail—possibly forever. But even in custody, he remained unrepentant . . . and an enigma.

In Lone Wolf, Maryanne Vollers brings the reader deep inside one of the most sensational cases of domestic terrorism in American history. At the same time, without losing sight of the hideous nature of Rudolph's violent crimes, she successfully puts a human face on an iconic killer while exploring the painful mysteries of the heart.

“The gripping story of one of America’s most notorious domestic terrorists…A disturbing and finely drawn portrait of a lone wolf, an unrepentant criminal who acted alone.” - Los Angeles Times

“Maryanne Vollers turns out another top-notch investigative work, tackling the enigma of Eric Rudolph…through incisive interviews…she zeroes in on the nature and nurture of home grown terrorism.” - Elle

“An astonishing, disturbing, and thrilling tale of the manhunt for the mysterious fugitive bomber who terrified a nation, defied capture, and led his pursuers on a marathon chase into the wilderness. Maryanne Vollers combines superb research and masterful storytelling to reveal an uncomfortable truth: even in the modern age, it remains possible for our outlaws to vanish, and to haunt the American scene.” - James Swanson, author of Manhunt

“Ever since he fled to the hills, the real Eric Rudolph has hidden in a thicket of mystery and myth. Maryanne Vollers finally flushes him out. Lone Wolf is a masterful work of narrative journalism, tenaciously reported and grippingly told.” - Tony Horowitz, author of Blue Latitudes

“A page-turning account …Vollers captures the astonishing tale from all sides, including Rudolph himself.” - Seattle Post-Intelligencer

Maryanne Vollers, the author of Lone Wolf and Ghosts of Mississippi, has also collaborated with Hillary Rodham Clinton and Ashley Judd on their bestselling memoirs. She lives with her husband in Montana.

Other Works by Maryanne Vollers