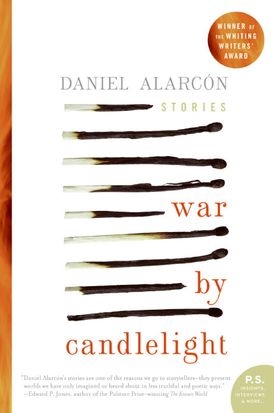 “[Alarcón’s] tales, set largely in the hardscrabble world of Lima, build with all the power of a Flannery O’Connor story: a gentle enough start, an innocent setting, and before long the reader is adrift in a drama that defies the imagination—with characters that live long after the book is closed.”  — Washington Post Book World

In this exquisite story collection, Daniel Alarcón moves from Third World urban centers to the fault lines that divide nations and people to illuminate wars, both national and internal, waged in jungles, across the borders, in the streets of Lima, and in the intimacy of New York apartments. He tells of lives at the margins: an unrepentant terrorist remembers where it all began, a would-be emigrant contemplates the ramifications of leaving and never coming back, a reporter turns in his pad and pencil for the inglorious costume of a street clown. War by Candlelight is a devastating portrait of a world in flux from an extraordinary new voice in literary fiction, one you will not soon forget.

“It was bound to happen: the great new Latin American voice writes in English. Daniel Alarcón’s surprising and adrenaline-filled short stories not only put him immediately on the map, they turn the damn map upside down.” — Alberto Fuguet, author of The Movies of My Life

“Powerful, poetic, and bold. I loved it.” — Chris Offutt

“War by Candlelight is frighteningly unpretentious and direct, as it mines a territory all its own. These stories bare luminous and mundane messages of new worlds with equal aplomb. An inspiring debut.” — Ernesto Quinonez, author of Chango's Fire and Bodega Dreams

“In War by Candlelight, each story blends with the next so that finally they all seem like plays within one greater play about the natural limits, both personal and historical, of unfair warfare. Mr. Alarcon wrote this collection of stories in his early 20s, and yet he has written stories about isolation and stultifying grief as if his soul has the normal scarred layout of a 48 year old divorced father of two dead sons. These stories are knowledgeable and mock sentimentality when they show us how so many occasions in life are merely small rehearsals for death.”  — Joe Loya, author of The Man Who Outgrew His Prison Cell

“Alarcon returned to Peru on a Fulbright and now evokes the sorrows and beauty of that ravaged land with a precision and steadiness that stand in inverse proportion to the magnitude of the losses he so powerfully dramatizes.” — Booklist (starred review)

“Alarcón draws on the plight of Lima’s poor and the hopes of New York’s immigrants in this raw first collection.” — New York Times Book Review

“The engaging stories in Daniel Alarcon’s debut collection, War By Candlelight, draw on Peru’s violent history, the plight of Lima’s poor and the hopes of immigrants in New York. They are finely crafted fiction, rich in feelings and images. . . . vivid with precise details.” — Chicago Tribune

“Precise, searing language and immediately embraceable characters...Alarcón’s skill with language and his eye for the beautiful tragedy of the human condition are on brilliant display in War By Candlelight." — Minneapolis Star Tribune

“However difficult it may be for a person to straddle two cultures, it’s an advantage for a writer—an advantage Alarcón exploits with a technical skill and a maturity of feeling that belie his age. . . . Like all good short-story writers, he has the gift of compression, of reducing ideas to images. Striking details are what we remember best from War by Candlelight.” — Los Angeles Times

“Fearless and electric . . . [Alarcón's] prose is alive with the seen: the large and dramatic, but also the peripheral glimpse, like neighborhood kids lacing up their cheap sneakers. . . . [He] is a master delineator of place. When he puts us there, when his city becomes our city, the stunner is that everything is instantly recognizable. That’s how we know he has stolen our minds.” — Dallas Morning News

“Daniel Alarcón’s stories transcend any label. He moves beyond any designation. The stories are by turns gritty and elegant, startling and stunning. . . . War by Candlelight attests to this writer’s talents to dangle shadowy visions before us while swooping down to light the way to the next story.” — San Antonio Express-News

Daniel Alarcón was born in Lima, Peru, in 1977 and raised in Birmingham, Alabama. His collection of short stories, ‘War By Candlelight’, was published in 2005 to great acclaim, and was followed by a novel, ‘Lost City Radio’, in 2007. His writing has appeared in ‘McSweeney’s’, ‘n+1’, and ‘Harper’s’, and he has been named one of the 20 best writers under 40 by the ‘New Yorker. He lives in Oakland, California. ‘At Night We Walk in Circles’ is his second novel.

Other Works by Daniel Alarcón

Love Yourself Like Your Life Depends on It \ (Spanish edition)