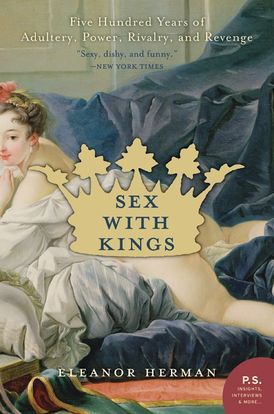 Throughout the centuries, royal mistresses have been worshiped, feared, envied, and reviled. They set the fashions, encouraged the arts, and, in some cases, ruled nations. Eleanor Herman's Sex with Kings takes us into the throne rooms and bedrooms of Europe's most powerful monarchs. Alive with flamboyant characters, outrageous humor, and stirring poignancy, this glittering tale of passion and politics chronicles five hundred years of scintillating women and the kings who loved them.

Curiously, the main function of a royal mistress was not to provide the king with sex but with companionship. Forced to marry repulsive foreign princesses, kings sought solace with women of their own choice. And what women they were! From Madame de Pompadour, the famous mistress of Louis XV, who kept her position for nineteen years despite her frigidity, to modern-day Camilla Parker-Bowles, who usurped none other than the glamorous Diana, Princess of Wales.

The successful royal mistress made herself irreplaceable. She was ready to converse gaily with him when she was tired, make love until all hours when she was ill, and cater to his every whim. Wearing a mask of beaming delight over any and all discomforts, she was never to be exhausted, complaining, or grief-stricken.

True, financial rewards for services rendered were of royal proportions -- some royal mistresses earned up to $200 million in titles, pensions, jewels, and palaces. Some kings allowed their mistresses to exercise unlimited political power. But for all its grandeur, a royal court was a scorpion's nest of insatiable greed, unquenchable lust, and vicious ambition. Hundreds of beautiful women vied to unseat the royal mistress. Many would suffer the slings and arrows of negative public opinion, some met with tragic ends and were pensioned off to make room for younger women. But the royal mistress often had the last laugh, as she lived well and richly off the fruits of her "sins."

From the dawn of time, power has been a mighty aphrodisiac. With diaries, personal letters, and diplomatic dispatches, Eleanor Herman's trailblazing research reveals the dynamics of sex and power, rivalry and revenge, at the most brilliant courts of Europe. Wickedly witty and endlessly entertaining, Sex with Kings is a chapter of women's history that has remained unwritten -- until now.

“With all the suspense of a thriller… this book is simply ideal for a historical bestseller!” — Barbara Wegmann, Amazon Germany in-house critic

“Herman’s spirited history of royal “mistresshood” is certainly a catchy read.... History made as buoyant as fiction.” — Booklist