The Spirited Women Who Shaped Our Country 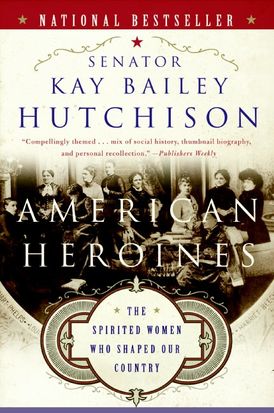 The Spirited Women Who Shaped Our Country

As long as there has been an America, the indomitable spirit of American women has shaped both the country's history and society. Regardless of the time and place these women were born each excelled in her respective field, making it easier for the next generation. This is what makes them heroines.

In American Heroines, Kay Bailey Hutchison presents female pioneers in fields as varied as government, business, education and healthcare, who overcame the resistance and prejudice of their times and accomplished things that no woman–and sometimes no man –– had done before. Hutchison, a pioneer in her own right, became the first woman elected to the United States Senate from the State of Texas.

Interspersed with the stories of America's historic female leaders are stories of today's women whose successes are clearly linked to those predecessors. Would Sally Ride have been given the chance to orbit the earth had Amelia Earhart not flown solo across the Atlantic Ocean fifty years before? Had Clara Barton not nursed wounded soldiers on Civil War battlefields, aid may not have reached the millions it did while the Red Cross was in the hands of women like Elizabeth Dole and Bernadine Healy. Had Oveta Culp Hobby not been appointed the first Secretary of the Department of Health and Education by President Eisenhower, the country may have been deprived of such leaders as Secretary of State Madeline Albright and National Security Advisor Condoleeza Rice.

As a young girl, Senator Hutchison dreamed of an America where the qualifier "the first woman" had become obsolete. The profiles contained in American Heroines, illustrate how her dream is coming true, one courageous step at a time.