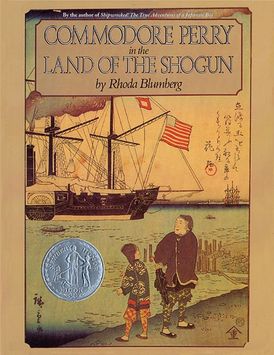 In 1853, few Japanese people
knew that a country
called America even existed.

For centuries, Japan had isolated itself from the outside world by refusing to trade with other countries and even refusing to help shipwrecked sailors, foreign or Japanese. The country's people still lived under a feudal system like that of Europe in the Middle Ages. But everything began to change when American Commodore Perry and his troops sailed to the Land of the Rising Sun, bringing with them new science and technology, and a new way of life.

Rhoda Blumberg has written about the opening of Japan (1853-1854) in Commodore Perry in the Land of the Shogun, a Newbery Honor Book, which also won the Boston Globe/Horn Book Award and the Golden Kite Award. Her acclaimed histories also include The Incredible Journey of Lewis & Clark, The Great American Gold Rush, and The Remarkable Voyages of Captain Cook, all ALA Notable Books. She is the winner of the Washington Post/Children's Book Guild Award for her overall contribution to nonfiction.

Rhoda Blumberg says that while doing research for Commodore Perry, "I read about the ordeals and strange adventures of Manjiro, then spent years replaying his life story in my mind until I felt impelled to write about him."

The author and her husband, Gerald, live in Yorktown Heights, New York.

Other Works by Rhoda Blumberg