How Nature Turns on Nurture 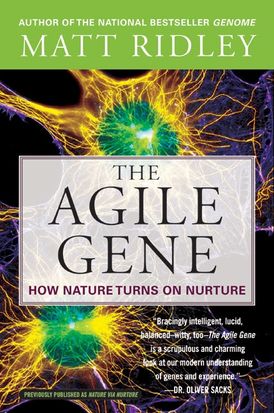 How Nature Turns on Nurture

Armed with extraordinary new discoveries about our genes, acclaimed science writer Matt Ridley turns his attention to the nature-versus-nurture debate in a thoughtful book about the roots of human behavior.

Ridley recounts the hundred years' war between the partisans of nature and nurture to explain how this paradoxical creature, the human being, can be simultaneously free-willed and motivated by instinct and culture. With the decoding of the human genome, we now know that genes not only predetermine the broad structure of the brain, they also absorb formative experiences, react to social cues, and even run memory. They are consequences as well as causes of the will.

“An engrossing study of what makes us who we are … conveyed with insight and style.” - Publishers Weekly (starred review)

“Ridley is simply one of the best science writers in the business.” - Hartford Courant

MATT RIDLEY is the award-winning, bestselling author of The Evolution of Everything: How New Ideas Emerge, The Rational Optimist: How Prosperity Evolves, Genome: The Autobiography of a Species in 23 Chapters, and The Red Queen: Sex and the Evolution of Human Nature. His books have sold more than one million copies in thirty languages worldwide. He has written for the Wall Street Journal and the Times of London as well as the Economist. He is a member of the House of Lords and lives in Newcastle and London.