Out of the Blue: The inside story of Liz Truss and her astonishing rise to power 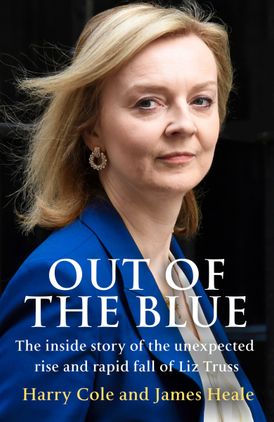 Out of the Blue: The inside story of Liz Truss and her astonishing rise to power

She is the longest-serving member of the Cabinet, but Britain’s new Prime Minister is virtually unknown to millions of voters. Written off, mocked and undermined by even her closest colleagues, Liz Truss has slowly but determinedly taken over 10 Downing Street.

With unrivalled access and insight, award-winning political journalists Harry Cole and James Heale chart the rise of the geeky teenage Lib Dem who transformed into the queen of the Brexiteers. They track her journey through some of the most powerful jobs in Cabinet and an unexpected rebranding from wonkish Tory loyalist to free-wheeling Instagram star.

For the first time, Liz’s closest friends and supporters, as well as her worst critics and rivals, paint the true picture of Britain’s third female Prime Minister.

HARRY COLE is the award-winning Political Editor of <i> The Sun</i>. Twice winner of Scoop of the Year, he has been reporting from the heart of Westminster for more than decade.

JAMES HEALE writes for <i> The Spectator</i> and edits the Tory bible’s gossip column. He has undertaken extensive biographical and investigative research during six years on Fleet Street.

Other Works by James Heale