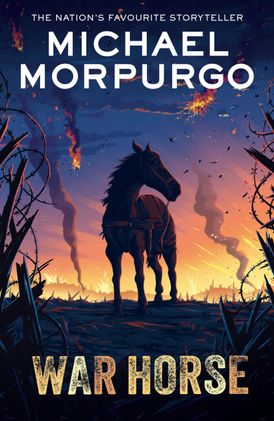 Before the Steven Spielberg film, before the National Theatre production, there was the classic children’s novel…

In the deadly chaos of the First World War, one horse witnesses the reality of battle from both sides of the trenches. Bombarded by artillery, with bullets knocking riders from his back, Joey tells a powerful story of the truest friendships surviving in terrible times.

One horse has the seen the best and the worst of humanity. The power of war and the beauty of peace. This is his story.

War Horse was adapted by Steven Spielberg as a major motion picture with Jeremy Irvine, Emily Watson, and Benedict Cumberbatch. The National Theatre production opened in 2007 and has enjoyed successful runs in the West End and on Broadway.

“There are few children’s writers as compelling as Michael Morpurgo.” <i>Daily Express</i>

“Morpurgo, as always, is subtle and skillful, and incorporates social and moral issues into his writing without being self-righteous or detracting from the quality of the narrative”
Elizabeth Reilly, British Council

“The former children's laureate has the happy knack of speaking to both child and adult readers.” <i>Guardian</i>

The Fox and the Ghost King

Of Lions and Unicorns: A Lifetime of Tales from the Master Storyteller

Alone on a Wide Wide Sea

An Elephant in the Garden