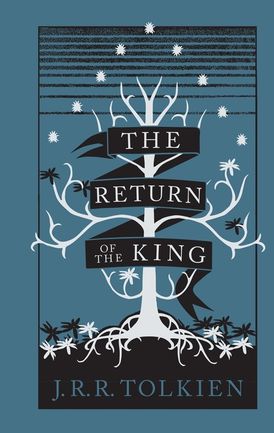 Special unjacketed hardback edition of the final part of J.R.R. Tolkien’s epic masterpiece, The Lord of the Rings. This edition features the complete story with a unique cover design embellished with silver foil and the iconic maps appearing in red and black as endpapers.

Gandalf returned, miraculously, and defeated the evil wizard, Saruman. Meanwhile, Sam and Frodo progressed towards Mordor to destroy the Ring, accompanied by Sméagol – Gollum, still obsessed by his ‘preciouss’. After a battle with the giant spider, Shelob, Sam left his master for dead; but Frodo is still alive – in the hands of the orcs. And all the time the armies of the Dark Lord are massing.