Mama Still Got It 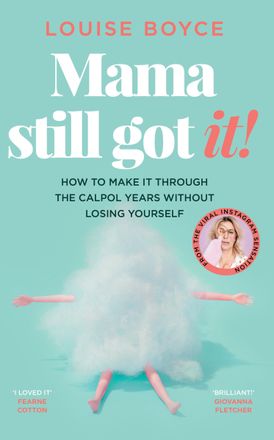 Mama Still Got It

The hilarious debut book from Instagram star @mamastillgotit_, chronicling the euphoric highs and epic fails of the school year.

Breaking the typical 'mumfluencer' mould, Louise Boyce (AKA @mamastillgotit_) has fast become every parents’ most-liked social media star, with her ability to capture the seemingly mundane moments of raising kids and spin them into hilarious sketches that all parents can relate to – often featuring her tiny-handed character, Bernie.

In her debut book, mum-of-three and model Louise gives a hilarious account of life raising kids through the school year (AKA the ‘real’ calendar). From the heady days of September and the moment our little darlings head back to school, through to Christmas, Easter and the following summer when the whole damned cycle begins again, Mama Still Got It charts the euphoric highs and sh*t-soaked lows of parenting.

Louise’s life takes in all the key milestones: watching your treasured child ruin the school photo, being late for pick up, the dreaded class Whatsapp groups, Halloween, chocolate advent calendars, and the unmatched agony of parents’ races on Sports Day. She even gives her husband Jesse a ‘right of reply’, and her own mother reflects on how being a parent has changed over the decades, too.

Told with Louise’s signature warmth and painful relatability, there’ll also be many LOLs along the way. Because, as we all know, laughter is the best medicine. That, and Calpol.

Fashion model, content creator, podcaster and mother of three Louise Boyce is more commonly known by her Instagram handle, @mamastillgotit_. Breaking the typical 'mumfluencer' mould, her ability to capture the seemingly mundane moments of motherhood and spin them into hilarious sketches that all parents can relate to has become her trademark.

Louise has recently appeared as a guest on BBC Radio 4's Woman's Hour as well as various podcasts discussing motherhood and life as a model and comedic content creator. Her blog and podcast alike speak to real women about all range of topics from surviving the summer holidays to make-up hacks.

Louise's refreshing take on parenthood and womanhood has attracted attention from a host of brands, such as Garnier, L'Oreal Paris, eBay and Very, with which she has recently commenced long-term partnerships. Louise is also the creator of the ‘PushItOut’ campaign, which asks brands to make a disclaimer when using a prosthetic bumps on models.

Other Works by Louise Boyce