The Hard Road Out: One Woman’s Escape From North Korea 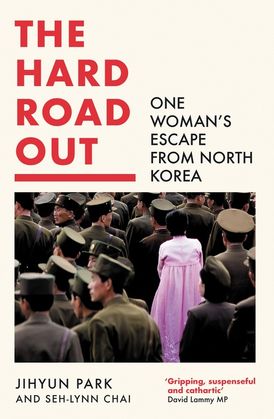 The Hard Road Out: One Woman’s Escape From North Korea

The harrowing story of a woman who escaped famine and terror in North Korea, not once but twice.

'A gripping, suspenseful and cathartic memoir that tells a story of pain and perseverance and makes the moral case for asylum.' David Lammy MP

North Korea is an open-air prison from which there is no escape. Only a handful of men and women have succeeded.

Jihyun Park is one of these rare survivors. Twice she left the land of the 'socialist miracle' to flee famine and dictatorship.

By the age of 29 she had already witnessed a lifetime of suffering. Family members had died of starvation; her brother was beaten nearly to death by soldiers. Even smiling and laughing was discouraged.

The first time she ran, she was forced abandon her father on his deathbed – crossing the border under a hail of bullets. In China she was sold to a farmer, with whom she had a son, before being denounced and forcibly returned to North Korea.

Six months later guards abandoned her, injured, outside a prison camp. She recovered and returned China to seek her son, now six, before attempting to navigate the long, hard road through the Gobi Desert and into Mongolia.

Clear-eyed and resolute, Jihyun's extraordinary story reveals a Korea far removed from the talk of nuclear weapons and economic sanctions. She remains sanguine despite the hardship. Recalling life's tiny pleasures even at her darkest moments, she manages to instill her tale with incredible grace and humanity.

Beautifully written with South Korean compatriot Seh-lynn Chai, this compelling book offers a stark lesson in determination, and ultimately in the importance of asylum.

Jihyun Park was born in Chongjin, North Korea, in 1968. She experienced acute poverty, famine, illness, and intimidation. She first escaped at the age of 29. After her second escape from North Korea, with the help of the UN, she was granted asylum seeker status in 2008 and moved to Bury, Greater Manchester, where she lives with her husband Kwang and three children. She has been outreach and project officer at the European Alliance for Human Rights in North Korea and is a human rights activist.

Seh-Lynn Chai is South Korean. She divides her time between London, where she lives with her family, and Seoul, where her parents reside. She has a Bachelor’s and a Master’s degree in French Literature from L’Université Paris-Sorbonne (Paris IV) and an MBA from Columbia Business School. After a career in finance at JP Morgan, she is now an active campaigner for peace on the Korean Peninsula and for human rights and has served on the Korean government’s Peaceful Unification Advisory Council.