The Lost Rainforests of Britain 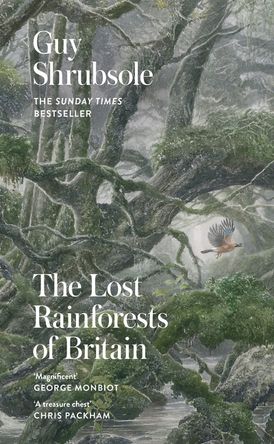 The Lost Rainforests of Britain

The Sunday Times Science Book of the Year

‘If anyone was born to save Britain’s rainforests, it was Guy Shrubsole’ Sunday Times

From the bestselling author of Who Owns England?, a mesmerising chronicle of our forgotten rainforests – and an inspiring intervention to help restore them to the places they once were

In 2020, writer and campaigner Guy Shrubsole moved from London to Devon. As he explored the wooded valleys, rivers and tors of Dartmoor, Guy discovered a spectacular habitat that he had never encountered before: temperate rainforest. Entranced, he would spend the coming months investigating the history, ecology and distribution of rainforests across England, Wales and Scotland.

Britain, Guy discovered, was once a rainforest nation.

This is the story of a unique habitat that has been so ravaged, most people today don’t realise it exists. Temperate rainforest may once have covered up to one-fifth of Britain and played host to a dazzling variety of luminous life-forms, inspiring Celtic druids, Welsh wizards, Romantic poets, and Arthur Conan Doyle’s most loved creations. Though only fragments now remain, they form a rare and internationally important habitat, home to lush ferns and beardy lichens, pine martens and pied flycatchers. But why are even environmentalists unaware of their existence? And how have we managed to so comprehensively excise them from our cultural memory?

Taking the reader on an awe-inspiring journey through the Atlantic oakwoods and hazelwoods of the Western Highlands and the Lake District, down to the rainforests of Wales, Devon and Cornwall, The Lost Rainforests of Britain maps these under-recognised ecosystems in exquisite detail – but underlines that without immediate political and public support, we risk losing them from the landscape, and perhaps our collective memory, forever. A rich, elegiac and boundary-pushing feat of research and reportage, this is the extraordinary tale of one person’s quest to find Britain’s lost rainforests, and bring them back.

<b>Guy Shrubsole</b> is a writer and environmental campaigner. He has worked for Rewilding Britain, Friends of the Earth, the UK government’s Department for Environment, Food and Rural Affairs, and New Zealand’s Ministry of Agriculture. He has written widely for publications including the <i>Guardian</i> and <i>New Statesman</i>. His first book, <i>Who Owns England?</i>, was an instant <i>Sunday Times</i> bestseller.

Other Works by Guy Shrubsole

Who Owns England?: How We Lost Our Land and How to Take It Back

Who Owns England?: How We Lost Our Green and Pleasant Land, and How to Take It Back