Architects of Terror: Paranoia, Conspiracy and Anti-Semitism in Franco’s Spain 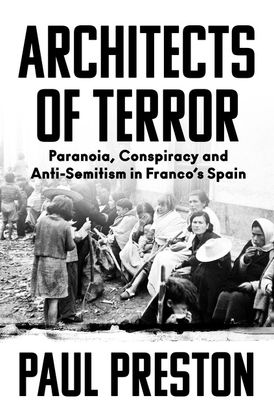 Architects of Terror: Paranoia, Conspiracy and Anti-Semitism in Franco’s Spain

From the preeminent historian of 20th century Spain Paul Preston, Architects of Terror is a new history of how paranoia, conspiracy and anti-Semitism was used to justify the military coup of 1936 and enabled the construction of a dictatorship built on violence and persecution.

It is the previously untold story of how antisemitic beliefs were weaponised to justify and propagate the Franco overthrow of liberal Spain.

The coup was launched to overturn the educational and social reforms of the democratic Second Republic and to combat its cultural challenges to the established order. The consequent civil war was fought in the interests of the landowners, industrialists, bankers, clerics and army officers whose privileges were threatened. In a country with a tiny minority of Jews, fewer than 6,000 in 1936, and a similar number of Freemasons, a central justification for the civil war that took the lives of around 500,000 Spaniards was the alleged scheme for world domination by the so-called Jewish-Masonic-Bolshevik Conspiracy. Francisco Franco and his inner circle were ardent believers in, and spread, both the idea of this invented conspiracy and the belief that Jews and Freemasons must be annihilated.

Architects of Terror is the story of how fake news, mendacity, corruption, and nostalgia for lost empire were the engines for violence. The book takes us through the key individuals who propagated the myth of the Jewish-Masonic-Bolshevik Conspiracy and to the central figures who implemented the horrors that it justified. Of the many views these actors shared were their unanimous conviction of the factual veracity of the notorious fabrication about the alleged global domination of the Jews, The Protocols of the Elders of Zion and of the idea that Freemasonry was responsible for Spain’s loss of empire.

This is a history that reverberates in our own political moment.

Juan Carlos: Steering Spain from Dictatorship to Democracy (Text Only)

The Spanish Civil War: Reaction, Revolution and Revenge (Text Only)

Doves of War: Four Women of Spain (Text Only)

The Destruction of Guernica

The Spanish Holocaust: Inquisition and Extermination in Twentieth-Century Spain