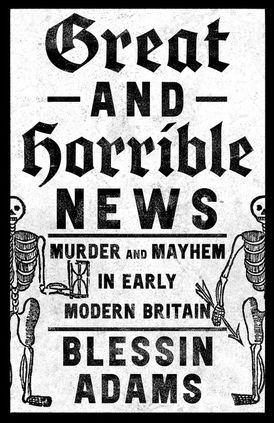 In early modern England, murder truly was most foul. Trials were gossipy events packed to the rafters with noisome spectators. Executions were public proceedings which promised not only gore, but desperate confessions and the grandest, most righteous human drama. Bookshops saw grisly stories of crime and death sell like hot cakes.

This history unfolds the true stories of murder, criminal investigation, early forensic techniques, high court trials and so much more.

In thrilling narrative, we follow a fugitive killer through the streets of London, citizen detectives clamouring to help officials close the net. We untangle the mystery of a suspected staged suicide through the newly emerging science of forensic pathology. We see a mother trying to clear her dead daughter’s name while other women faced the accusations – sometimes true and sometimes not – of murdering their own children.

These stories are pieced together from original research using coroner’s inquests, court records, parish archives, letters, diaries and the cheap street pamphlets that proliferated to satisfy a voracious public.

These intensely personal stories portray the lives of real people as they confronted the extraordinary crises of murder, infanticide, miscarriage and suicide. Many historical laws and attitudes concerning death and murder may strike us as exceptionally cruel, and yet many still remind us that some things never change: we are still fascinated by narratives of murder and true crime, murder trials today continue to be grand public spectacles, female killers are frequently cast as aberrant objects of public hatred and sexual desire, and suicide remains a sin within many religious organisations and was a crime in England until the 1960s.

Great and Horrible News! explores the strange history of death and murder in early modern England, yet the stories within may appear shockingly familiar.

Blessin Adams traded police work investigating today’s crime in the Norfolk Constabulary for academia, tracing the lives and deaths of people in early modern England. Blessin received her doctorate following research in early modern English law and literature at the University of East Anglia. As a fan of true crime she is fascinated by historical stories of murder and justice. She lives in Norfolk with her husband and two dogs, and is a beekeeper in her spare time.

Other Works by Blessin Adams