Portraits and Poison (The Lizzie and Belle Mysteries, Book 2) 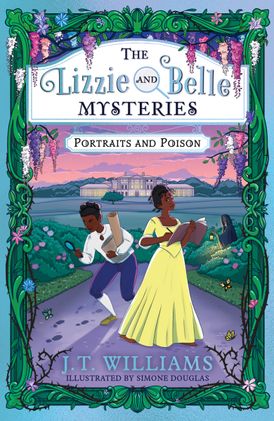 Portraits and Poison (The Lizzie and Belle Mysteries, Book 2)

The second book in the thrilling middle grade mystery series, perfect for fans of Robin Steven’s Murder Most Unladylike. Set in eighteenth-century London, with all the fun and zest of Hamilton and inspired by real Black British historical figures.

Agents of history. Partners in Mystery. Sisters in solving crime.

Twelve-year-olds Lizzie Sancho and Dido Belle are from different worlds – Lizzie lives in Westminster in her dad’s tea shop, while Belle is an heiress being brought up by her aunt and uncle at grand Kenwood House – but they both share a love of solving mysteries. And after saving Lizzie’s father from attempted murder surely there is no threat too dangerous for the detective duo?

But when the brand new portrait of the Sancho family goes missing, it soon becomes clear to see that a much bigger, more terrifying secret haunts the cobbled streets of London. A conspiracy is underway, one that begins with the kidnapping of Lizzie’s friend Mercury, and leads all the way to a series of attempted poisonings, all at the hands of an ominous organisation pulling the strings from the shadows.

Not to mention Belle’s cousin Eliza is back and town, who us acting stranger than ever and seems determined to keep getting in the way of their investigations!
And just who is that mysterious figure they keep glimpsing floating around the grounds of Kenwood House?

When anyone could be involved in this Brotherhood of Masters, who can Lizzie and Belle trust? Once again it is up to the two girls to unveil the truth and put an end to the corruption that plagues the city.

“Black British Georgian history is effectively brought to life through characters based on real people, but it is the suspense and plot twists that keep the pages turning” – Sarah Keating, <i>The Irish Times</i>

‘This vivid theatreland mystery – whose atmospheric setting recalls Phillip Pullman’s <i>The Ruby and the Smoke</i> series – is deeply rooted in the abolitionist milieu and resonates sonorously today.’
<i>The Observer</i>, Chapter Books of the Month, 29th May 2022

‘I was hooked from the outset as Williams expertly takes the real life historical figures of two black Georgians Lizzie Sancho and Dido Belle and imagines them tackling a mystery of an attempted onstage murder! From the descriptions of the Jamaica Coffee House to the candle lit theatre chandeliers Georgian London is vividly brought to life. A must read for mystery fans.’
Joseph Coelho, Waterstone’s Children’s Laureate

“Bringing Georgian London vividly to life, this is a wonderful historical mystery with two delightful heroines. I can't wait to read the next instalment and find out what Lizzie and Belle will get up to next!”
Katherine Woodfine, author of The Sinclair’s Mysteries series

J.T. Williams studied English Literature at Cambridge University before becoming a primary school teacher. After teaching full-time, she became a programme manager at the Royal African Society leading creative writing schools workshops for the literature festival Africa Writes. Now a freelance educator and writer, she has won several prizes for her work. Her debut short story appeared in The Very Merry Murder Club, edited by Robin Stevens and Serena Patel.

Other Works by J.T. Williams