The Times End of the Line: British railway closures from 1948 to Beeching 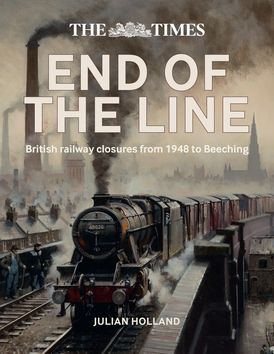 The Times End of the Line: British railway closures from 1948 to Beeching

Covering the period from 1948 to 1996, The Times End of the Line chronologically traces the history of over 400 of long forgotten railway lines, region by region, from their opening to closure and a few cases to reopening.

For such a small country, Britain once possessed one of the most intensive rail networks in the world which, by the outbreak of the First World War, had reached a peak of 23,440 route miles.

Two world wars and nationalisation of the railways brought about significant closures. Then on 27 March 1963 Dr Richard Beeching’s report, The Reshaping of British Railways, was published. This was the final nail in the coffin for Britain’s railways which eventually brought closure over the following years to a further 4,500 route miles, 2,500 stations and the loss of 67,700 jobs.

This comprehensive guide will be illustrated with regional maps and rare archive photographs, transporting the reader back to the era of steam when railways still played an important role in daily life.

From a very young age, Julian Holland has had a fascination with railways. He is the writer and photographer on many bestselling railway books, including the award winning The Times Mapping the Railways (HarperCollins, 2011), and Dr Beeching’s Axe: 50 Years On (David & Charles, 2013).

Prestigious reference books covering a range of interests and hobbies.

Other Works by Times Books

The Times Guide to the House of Lords 2023: The definitive guide to the upper house of the United Kingdom Parliament

The Times All Aboard!: Remembering Britain’s Railways

The Times: The Joy of Railways: Remembering the golden age of trainspotting

The Times: The Queen and the Commonwealth: Celebrating seven decades of state visits

The Times Lives Less Ordinary: obituaries of the eccentric, unique and undefinable

The Sunday Times A Life in the Day: Words of wisdom and domestic details from the rich and famous

The Sunday Times Investigates: Reporting That Made History