The Battle of Maldon: together with The Homecoming of Beorhtnoth 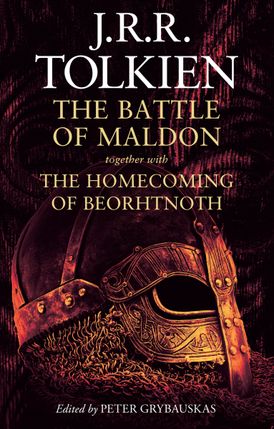 The Battle of Maldon: together with The Homecoming of Beorhtnoth

First ever standalone edition of one of J.R.R. Tolkien’s most important poetic dramas, that explores timely themes such as the nature of heroism and chivalry during war, and which features unpublished and never-before-seen texts and drafts.

In 991 AD, vikings attacked an Anglo-Saxon defence-force led by their duke, Beorhtnoth, resulting in brutal fighting along the banks of the river Blackwater, near Maldon in Essex. The attack is widely considered one of the defining conflicts of tenth-century England, due to it being immortalised in the poem, The Battle of Maldon.

Written shortly after the battle, the poem now survives only as a 325-line fragment, but its value to today is incalculable, not just as an heroic tale but in vividly expressing the lost language of our ancestors and celebrating ideals of loyalty and friendship.

J.R.R. Tolkien considered The Battle of Maldon ‘the last surviving fragment of ancient English heroic minstrelsy’. It would inspire him to compose, during the 1930s, his own dramatic verse-dialogue, The Homecoming of Beorhtnoth Beorhthelm’s Son, which imagines the aftermath of the great battle when two of Beorhtnoth’s retainers come to retrieve their duke’s body.

Leading Tolkien scholar, Peter Grybauskas, presents for the very first time J.R.R. Tolkien’s own prose translation of The Battle of Maldon together with the definitive treatment of The Homecoming of Beorhtnoth and its accompanying essays; also included and never before published is Tolkien’s bravura lecture, ‘The Tradition of Versification in Old English’, a wide-ranging essay on the nature of poetic tradition. Illuminated with insightful notes and commentary, he has produced a definitive critical edition of these works, and argues compellingly that, Beowulf excepted, The Battle of Maldon may well have been ‘the Old English poem that most influenced Tolkien’s fiction’, most dramatically within the pages of The Lord of the Rings.