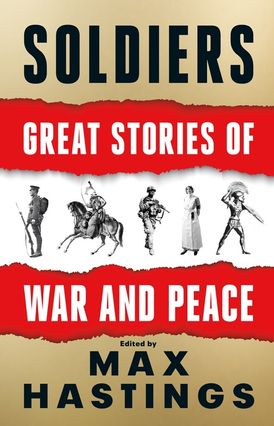 ‘A fascinating collection of military stories … The sort of book that can be picked up at intervals … [but] once tasted, is hard to put down’ Washington Post

Soldiers is a very personal gathering of sparkling, gripping tales by many writers, about men and women who have borne arms, reflecting bestselling historian Max Hastings’s lifetime of studying war. It rings the changes through the centuries, between the heroic, tragic and comic; the famous and the humble. The nearly 350 stories illustrate vividly what it is like to fight in wars, to live and die as a warrior, from Greek and Roman times through to recent conflicts in Iraq and Afghanistan.

Here you will meet Jewish heroes of the Bible, Rome’s captain of the gate, Queen Boudicca, Joan of Arc, Cromwell, Wellington, Napoleon’s marshals, Ulysses S. Grant, George S. Patton and the modern SAS. There are tales of great writers who served in uniform including Cobbett and Tolstoy, Edward Gibbon and Siegfried Sassoon, Marcel Proust and Evelyn Waugh, George Orwell and George MacDonald Fraser. Here are also stories of the female ‘abosi’ fighters of Dahomey and heroic ambulance drivers of World War I, together with the new-age women soldiers who have served in Iraq and Afghanistan. The stories reflect a change of mood towards warfare through the ages: though nations and movements continue to inflict terrible violence upon each other, most of humankind has retreated from the old notion of war as a sport or pastime, to acknowledge it as the supreme tragedy.

This is a book to inspire in turn fascination, excitement, horror, amazement, occasionally laughter. Max Hastings mingles respect for the courage of those who fight with compassion for those who become their victims, above all civilians, and especially in the twenty-first century, which some are already calling ‘the Post-Heroic Age’.

Sir Max Hastings chronicles Vietnam with the benefit of vivid personal memories: first of reporting in 1967-68 from the United States, where he encountered many of the war’s decision-makers including President Lyndon Johnson, then of successive assignments in Indochina for newspapers and BBC TV: he rode a helicopter out of the US Saigon embassy compound during the 1975 final evacuation. He is the author of twenty-six books, most about conflict, and between 1986 and 2002 served as editor-in-chief of the Daily Telegraph, then editor of the Evening Standard. He has won many prizes both for journalism and his books, of which the most recent are All Hell Let Loose, Catastrophe and The Secret War, best-sellers translated around the world. He has two grown-up children, Charlotte and Harry, and lives with his wife Penny in West Berkshire, where they garden enthusiastically.