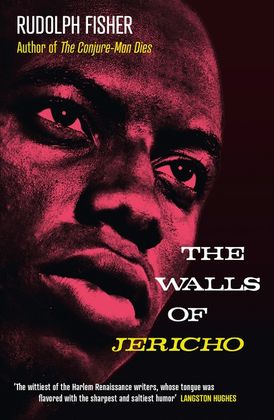 The first novel by one of the legends of the Harlem Renaissance, a classic in the annals of Black fiction.

When Black lawyer Fred Merrit purchases a house in the most exclusive white neighbourhood bordering Harlem, he has to hire the toughest removal firm in the area to help him get his belongings past the hostile neighbours. The removal men are Jinx Jenkins and Bubber Brown, who make the move anything but straightforward.

This hilarious satire of jazz-age Harlem derides the walls people build around themselves—colour and class being chief among them. In their reactions to Merrit and to one another, the characters provide an invaluable view of the social and philosophical scene of the times.

First published in 1928, The Walls of Jericho is the first novel by Rudolph Fisher, author of The Conjure-Man Dies, whom Langston Hughes called ‘the wittiest of the Harlem Renaissance writers, whose tongue was flavoured with the sharpest and saltiest humour’.

This new edition includes Fisher’s short story ‘One Month’s Wages’, which revisits Jinx and Bubber during the Depression when, down on their luck, one seeks to win money by gambling, the other by taking a job in a mortuary.

‘Fisher is an unusual individual. A physician by trade, he also published several books, including <i>The Conjure-Man Dies</i>, the first hard-boiled detective novel by an African American. This, Fisher's first novel, introduces protagonist Merrit, who buys a house on the border between the white and black sections of Harlem in the 1920s. The novel details the difficulties faced by educated African Americans who tried to enter into predominantly white society.’–<i>Library Journal</i>

‘One feels, smells, and tastes Fisher’s Harlem; its people come alive and one cares about them.’–<i>New York Times Book Review</i>

One of the premier writers of the Harlem Renaissance, Rudolph Fisher wrote stories depicting the multifaceted black urban experience that are still acclaimed today for their humor, grace, and objective view of Harlem life. Through his words, wrote the <i>New York Times Book Review</i>, ‘one feels, smells, and tastes his Harlem; its people come alive and one cares about them.’