Everyone Versus Racism: A Letter to My Children 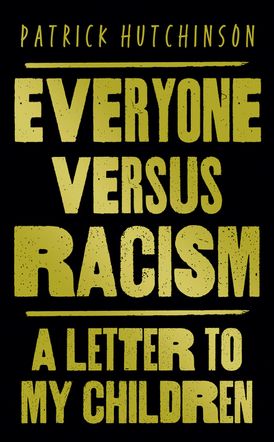 Everyone Versus Racism: A Letter to My Children

‘I just want equality, equality for all of us. At the moment, the scales are unfairly balanced and I just want things to be fair for my children, my grandchildren and future generations.’

On 13 June 2020, Patrick Hutchinson, a black man, was photographed carrying a white injured man to safety during a confrontation in London between Black Lives Matter demonstrators and counter-protestors.

The image went viral and quickly travelled around the world with Patrick being widely praised for his actions. In the press interviews that followed Patrick revealed a simple philosophy for his own personal beliefs on racism and why he had responded in the way he had.

‘It’s not black versus white, it’s everyone versus the racists,’ he said.

A message he wanted his own children and grandchildren to take forward and share.

In this poignant letter to his children, Patrick writes from the heart and shares the realities of life as a black man in Britain today, his own experiences with discrimination and the advice he wants to give the next generation to help break down barriers and unite everyone against racism.

Patrick Hutchinson is a personal trainer and a children’s athletics coach from south London who received worldwide attention after he was photographed carrying an injured counter-protestor to safety during a Black Lives Matter demonstration in central London. The photograph, which was taken by Dylan Martinez at a protest in response to the killing of George Floyd and in the midst of the COVID-19 pandemic, has been upheld as a defining moment of 2020 and the BLM movement. As a proud father-of-four and a grandfather-of-four, family is at the heart of everything for Patrick and if he isn’t training you will find him taking care of his children and grandchildren, who are the most important things to him of all.

Other Works by Patrick Hutchinson