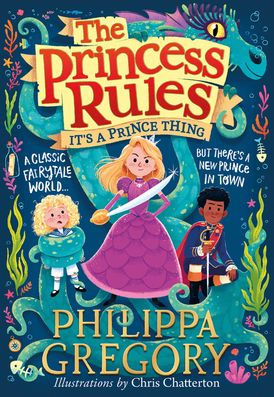 The sequel to THE PRINCESS RULES sees rebel princess, Princess Florizella, going on even more adventures, but this time, she also has a little brother in tow…

Once upon a time, there was a princess who broke all the rules, and dared to be different…

So when that same princess – Florizella – finds a baby boy delivered by stork to her parents’ palace, she is shocked to discover that he will one day be king and inherit her kingdom! For every prince is given a permit which allow them to do whatever they like in the same way that every princess is given a set of rules that they have to live by.

As soon as Princess Florizella’s brother is big enough to have adventures, she takes him all over the land, fighting pirates, wrestling with a sea serpent and rehoming a woolly mammoth.

Can Florizella prove that girls having rules and boys having permits isn’t right? And that princes and princesses, and girls and boys, should be anything that they want to be…

Philippa Gregory was an established historian and writer when she discovered her interest in the Tudor period and wrote the internationally bestselling novel The Other Boleyn Girl, which became a major film starring Natalie Portman and Scarlett Johansson. Her Cousins’ War novels were the basis for the highly successful BBC series, The White Queen.

Philippa’s other great interest is the charity that she founded twenty years ago: Gardens for The Gambia. She has raised funds and paid for over 200 wells in the primary schools of this poor African country.

Philippa is a former student of Sussex University and a PhD and Alumna of the Year 2009 of Edinburgh University. In 2016, she was presented with the Outstanding Contribution to Historical Fiction Award by the Historical Writers' Association. Her love for history and commitment to historical accuracy are the hallmarks of her writing. Philippa lives with her family on a small farm in Yorkshire and welcomes visitors to her site www.PhilippaGregory.com. You can also find her on Facebook, Twitter and YouTube.

Other Works by Chris Chatterton

The Mammoth Adventure (The Princess Rules)