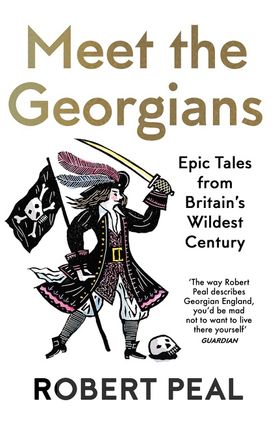 ‘The way Robert Peal describes Georgian England, you’d be mad not to want to live there yourself’ GUARDIAN

Anne Bonny and Mary Read, pirate queens of the Caribbean
Tipu Sultan, the Indian ruler who kept the British at bay
Olaudah Equiano, the former slave whose story shocked the world
Mary Wollstonecraft, the feminist who fought for women’s rights
Ladies of Llangollen, the lovers who built paradise in a Welsh valley

‘Mad, bad and dangerous to know’ is how Lord Byron, the poet who drank wine from a monk’s skull and slept with his half-sister, was described by one of his many lovers. But ‘mad, bad and dangerous’ serves as a good description for the entire Georgian period: often neglected, the hundred or so years between the coronation of George I in 1714 and the death of George IV in 1830 were years when the modern world was formed, and changes came thick and fast.

Across this century, new foods – pineapples, coffee and pepper – suddenly became available in the shops. Fashion exploded into a riot of colour, frilly shirts and wigs. Gin was drunk like it was water. Demands for women’s rights were heard, and it became possible to question the existence of God without fear of prompt execution.

These exciting new developments came, of course, from the expanding British Empire. Britain’s wealth and its sudden access to chocolate, chillies and spices, was entirely bound up with the conquest of overseas territories and the miserable suffering of enslaved workers.

This is the backdrop to Robert Peal’s new book, which introduces the Georgian era through the diverse lives of twelve ‘magnificent – if not moral’ people who defined it.

Robert Peal is a history teacher at the West London Free School. Having gained a double first from the University of Cambridge, he studied for his masters at the University of Pennsylvania. Robert qualified as a teacher through Teach First, before working as an education research fellow for the think tank Civitas, and as a 'Teacher in Residence' at the Department for Education. He has a passion for teaching and learning about history – his first attempt at a history book was writing about a local Civil War battle site Basing House aged thirteen.

Other Works by Robert Peal