Later ... With Jools Holland: 30 Years of Music, Magic and Mayhem 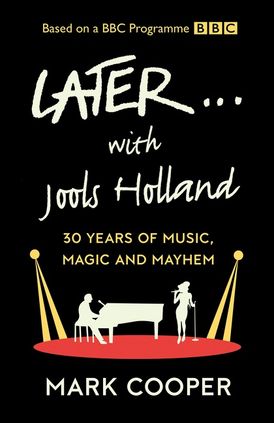 Later ... With Jools Holland: 30 Years of Music, Magic and Mayhem

Since its launch in late 1992, the BBC’s ‘Later….with Jools Holland’ has been widely regarded as the world’s foremost music programme, showcasing a huge variety of bands, singers and musicians in a live performance setting. Now in its 50th series ‘Later…’ has broadcasted over 300 episodes.

‘Later…’ is presented by musician and broadcaster Jools Holland and over the course of over 25 years has given a platform to both established and up-and-coming artists, many of whom have gone on to incredible success. The legends who have appeared on the show include Sir Paul McCartney, Robert Plant, U2, David Bowie, Van Morrison and Lou Reed, while artists such as Adele, Ed Sheeran, Coldplay, Amy Winehouse, Seasick Steve and Ryan Adams all cut their teeth here.

The book will be a definitive, celebratory oral history of the show – and the last three decades of music more generally – featuring interviews with many of those who have performed over its quarter century. Compiled by the show’s creator and producer, Mark Cooper, Later will have access to the unique photographic record of André Csillag (who has photographed the show and its stars from inception). With the express support of Jools Holland and the BBC the book will showcase the artistic talent that has graced the show over its quarter century with exclusive interviews and a behind the scenes look into music scenes from Britpop to Grime, plus contributions from Paul Weller, Bjork, Dave Grohl, Jack White, Ed Sheeran, Gregory Porter, Kano, Nick Cave, Alicia Keys, Richard Thompson, k.d. lang and Baaba Mall on the unique experience of playing Later…

Mark Cooper is the creator and producer of BBC TV’s longest running live music programme, Later… With Jools Holland. He has led BBC television coverage of Glastonbury, Reading and Radio 1's Big Weekend and has been responsible for major documentaries on BBC Two and BBC Four, notably the Britannia strand exploring diverse genres from jazz to metal to soul and beyond.

Other Works by Mark Cooper