Collateral Damage: Britain, America and Europe in the Age of Trump 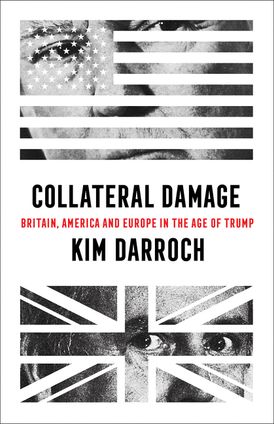 Collateral Damage: Britain, America and Europe in the Age of Trump

@realDonaldTrump: ‘The wacky ambassador that the UK foisted on the United States is not someone we are thrilled with, a very stupid guy …  We will no longer deal with him’

Kim Darroch was British Ambassador to the US as the age of Trump dawned and Brexit unfolded. As one of the UK’s most experienced and respected diplomats, Darroch was given the task of explaining Trump to the British and Brexit to the Americans. Choosing to resign after his confidential cables criticising the Trump administration were leaked to the press, Darroch’s unvarnished, behind-the-scenes account reveals for the first time the inside story of this tumultuous time and reflects more broadly on Britain’s relationship with the United States. In a book rich in anecdote and insight, he describes the challenges of dealing with the Trump White House and offers a diplomat’s perspective on Brexit and how it looked to Britain’s closest ally.

As the closest Brit to the story, Darroch explains why the British embassy suspected a Trump victory from as early as February 2016, what part every key figure – from Sarah Sanders to Michael Flynn – has played in Trump’s administration, and what balanced policy makers on both sides of the Atlantic should consider during this era of pandemic, seismic change and populist politics.

A riveting account from the best-informed insider, Collateral Damage charts the strangest and most convulsive period in the recent history of Britain and the US – and the state of the ‘special relationship’ today.

Kim Darroch is a retired UK civil servant and life peer in the House of Lords. His diplomatic career spanned over 40 years, primarily focusing on national security issues and European policy, and including roles as the UK’s National Security Adviser and Permanent Representative to the European Union. Most recently, Darroch served as British Ambassador to the United States (2016-2019). He was born in Durham and now lives in London with his wife, Vanessa. They have two grown-up children, Simon and Georgina.

Other Works by Kim Darroch