Wake Up: Why the ‘liberal’ war on free speech is even more dangerous than Covid-19 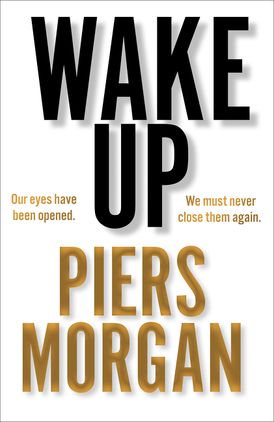 Wake Up: Why the ‘liberal’ war on free speech is even more dangerous than Covid-19

’The biggest threat to our freedom in the 21st century isn’t coronavirus but hysterically woke liberals trying to kill democracy by suppressing free speech.

’This is my clarion call, as a liberal myself, for them to stop screaming, shaming and cancelling everyone they disagree with, and start being part of the solution to global disharmony and division – not the problem.’

Piers has long been unashamedly vocal about the fundamental problems we face as a society, which only became clearer in the midst of the pandemic. Yet just as Coronavirus exposed our flaws, it also showcased our strengths. We saw selfless bravery in the heroic efforts of our health-care staff while thousands flocked to parks for picnics. As stockpilers revealed our extraordinary levels of self-interest, we also witnessed inspiring, noble acts from members of the public such as Captain Tom Moore. And all the while, the outraged woke brigade continued to take to Twitter, shutting down debate on important issues like gender, racism and feminism.

Wake Up is Piers’ rallying cry for a united future. He makes the case that a new type of ‘liberalism’ has emerged that is not only fundamentally illiberal, but also deeply flawed. Wake Up is a plea for a return to true liberalism, where freedom of speech is king. Above all, it’s a powerful account of how the world has finally started to wake up, and why it mustn’t go back to sleep again.

Piers Morgan was born in 1965. He studied journalism at Harlow College, beginning his career in local south London newspapers. Spotted by Kelvin MacKenzie of the <i>Sun</i> he was given his own showbiz column, <i>Bizarre</i>. Rupert Murdoch made him editor of the <i>News of the World</i> in 1994 and he was headhunted two years later to edit the <i>Mirror</i>, where he stayed until 2004 when he was fired following his decision to publish photos of British soldiers apparently abusing Iraqi prisoners of war. Piers was a judge on both Britain's Got Talent and America's Got Talent, won the first series of Donald Trump's Celebrity Apprentice and hosted his own prime-time CNN show, Piers Morgan Tonight. He currently hosts one of the UK’s popular morning shows, Good Morning Britain and the interview show Piers Morgan’s Life Stories. Piers writes regular columns for the <i>Mail on Sunday</i> and DailyMail.com, and has written several books including the No. 1 bestseller, <i>The Insider</i>.

Other Works by Piers Morgan