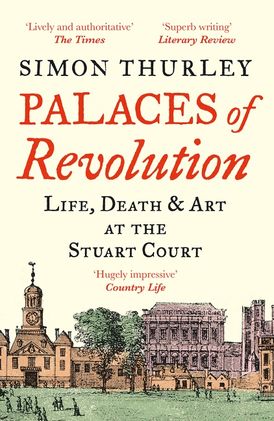 The story of the Stuart dynasty is a breathless soap opera played out in just a hundred years in an array of buildings that span Europe from Scotland, via Denmark, Holland and Spain to England.

Life in the court of the House of Stuart has been shrouded in mystery: the first half of the century overshadowed by the fall and execution of Charles I, the second half in the complete collapse of the House itself. Lost to time is the extraordinary contribution the Stuarts made to the fabric of sovereignty.

Every palace they built, painting they commissioned, or artwork they acquired was a direct reflection of the lives that they led and the way that they thought. Palaces of Revolution explores this rich history in graphic detail, giving a unique insight into the lives of this famous dynasty. It takes us from Royston and Newmarket, where James I appropriated most of the town centre as a sort of rough-and-ready royal housing estate, to the steamy Turkish baths at Whitehall where Charles II seduced his mistresses. We see the intimate private lives of the monarchs, presented through the buildings in which they lived and the objects they commissioned, creating an entirely new narrative of the Stuart century.

Palaces of Revolution traces this extraordinary period across the places and palaces on which the action played out, giving us a thrilling new history of this remarkable dynasty.

‘<b>A hugely impressive, readable book that covers its broad canvas with assurance</b> … Thoughtfully illustrated and furnished with plans of the buildings, itself a huge accomplishment’ John Goodall, <i>Country Life</i>

'In his admirably readable new book, Simon Thurley, who probably knows more about the palaces of the 16th and 17th centuries than anyone alive, has written a chronological survey of the royal residences of the Stuarts, a period of just over 100 years. You almost can read it as an alternative history of the dynasty … <b>Lively and authoritative</b>' Andrew Taylor, <i>The Times</i>

‘An absorbing account of the lives of these royal houses. It is a journey not just from palace to hunting lodge to castle, but into the small and poignant details of domestic existence’ Times Literary Supplement

‘This is a landmark book. Nobody interested in Tudor England can afford not to own a copy of this gateway into a lost world … compulsively readable’ Country Life

‘[Simon Thurley] certainly loves his subject. An enthusiasm that steadily bubbles forth from Houses of Power….Thurley’s reconstruction of these rooms is fascinating, but even more so is his description of what went on in them … A suitably opulent book’ The Times

‘Excellent … Fresh, learned, readable and full of life, [Houses of Power] is the Tudors at Home, as you've never seen them before’ Mail on Sunday