All My Brother’s Secrets: A powerful true story of love, loss and brutality 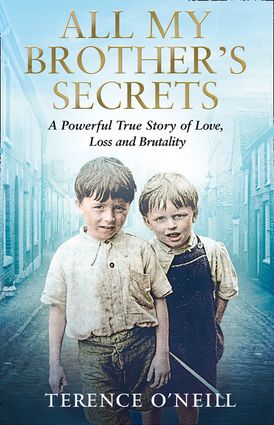 All My Brother’s Secrets: A powerful true story of love, loss and brutality

The shocking true story of terrible abuse and the remarkable boy who captured the heart of the nation when he testified in court to find justice for his brother's horrific death.

Terry O'Neill was just ten years old when he stood up in court to testify against his brutal foster parents, accused of the manslaughter of his twelve-year-old brother, Dennis.

Terry and his brother had been taken into care and moved through many foster homes until they came to live on the Shropshire farm owned by Reginald and Esther Gough in 1945. There they were to suffer brutal beatings and little care or love – they survived as best they could, looking out for each other, until the terrible morning when Terry couldn't wake Dennis.

In a time when the country was united by war and struggle, this landmark case shocked the nation and made headlines around the world. Terry, a small figure in the courtroom, captured the hearts of mothers and families everywhere, and the public outcry against the foster services led to the instigation of the first provisions to protect other vulnerable children from neglect and cruelty.

This is the remarkable true story of a boy who couldn't save his brother, but whose actions have gone to save many other children from the same fate.

Terence O’Neill is now 84 years old, and married with children, grandchildren and great-grandchildren. After his time at the Goughs, Terence remained in the care of the local authorities until he was 18. He then joined the Army for several years, before retiring out. He now lives, surrounded by his loving family, in South Wales.