Crucible of Hell: Okinawa: The Last Great Battle of the Second World War 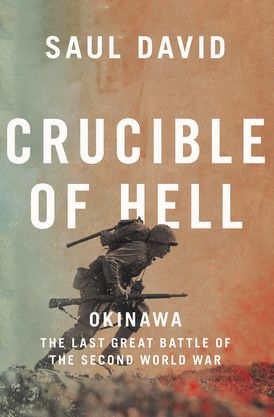 Crucible of Hell: Okinawa: The Last Great Battle of the Second World War

From award-winning historian Saul David, an action-packed and powerful new narrative of the Battle of Okinawa – one of the greatest battles to take place across air, land and sea, and one of the most extraordinary, unusual episodes of the Second World War.

For the ferocity of the fighting, the loss of life on both sides, and the pivotal, war-ending potential of its outcome, the assault on Okinawa had no match. Named ‘Operation Iceberg’ by the Americans leading the campaign against the Japanese island and ‘typhoon of steel’ afterwards for the overwhelming clash of soldiers, the battle was the bloodiest of the Second World War’s action in the Pacific. Of the 300,000 pre-war population of Okinawa, around half were killed, committed suicide, or went missing. On the US Navy’s side, the dead exceeded the wounded.

Saul David delivers fierce military action from both sides with masterful, close attention, weaving through the remarkable and dreadful features of the battle: the brutal barrage of the kamikaze attacks, which the Imperial Army believed would deter the American forces; the precedents it set for Japanese conscription as thousands of boys as young as fourteen were mobilized for guerrilla warfare; and the terrible circumstances of mass suicide by Japanese civilians, who as defeat loomed were encouraged by soldiers and handed grenades to use on their families. Where grenades failed, some family members beat their loved ones to death to save them from American hands.

Saul David captures the terrible action of the battle, drawing together first-hand narrative accounts with impeccable research to illuminate this shocking episode of history that is too often forgotten amidst Western-centric narratives of the Second World War.

Saul David is a historian, broadcaster and the author of several critically acclaimed works of fiction and non-fiction. His history books have been shortlisted for the Westminster Medal for Military Literature and variously named a Waterstones Military History Book of the Year and an Amazon History Book of the Year. He is Professor of Military History at the University of Buckingham.

Other Works by Saul David