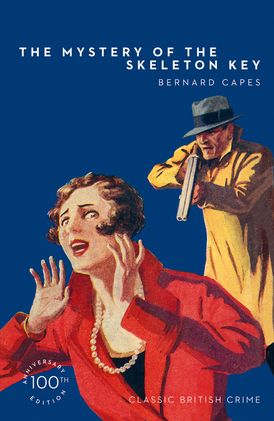 The Skeleton Key (1919) was the first detective novel published by Collins, ushering in the Golden Age, the Crime Club, and 100 years of remarkable crime fiction that would follow.

A body is discovered after a shooting party in the grounds of a country house in Hampshire. The police are called in, and a clever young detective, Sergeant Ridgway, begins to unravel a much more complicated and brutal case of murder than was first suspected. But has he met his match with Le Sage, a chess-playing Baron, who is convinced that the answers lie not in Hampshire but in Paris?

After 20 years of writing in various genres, The Skeleton Key was Bernard Capes’ crowning achievement, as he died shortly after completing the book. Introduced by Hugh Lamb, whose anthology The Black Reaper resurrected Capes’ reputation as one of the best horror writers of his generation, the book also includes its original tribute to Capes by G. K. Chesterton, author of the Father Brown mysteries.

Hugh Lamb has spent over forty years delving into weird fiction. Tired of anthologies reprinting the same old stories, he tried his hand at editing his own. His main area of research is Victorian ghost stories and he has published five anthologies of these: Victorian Tales of Terror, Terror by Gaslight, Victorian Nightmares, Tales from a Gaslit Graveyard, and Gaslit Nightmares. A freelance journalist by profession, Hugh Lamb lives in Sutton, Surrey.

Other Works by Bernard Capes