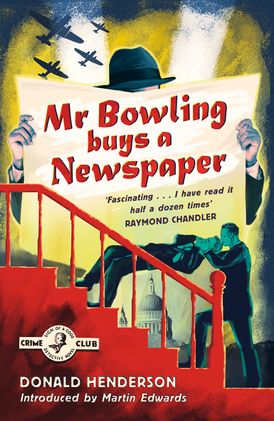 In Raymond Chandler’s favourite novel, Mr Bowling buys the newspapers only to find out what the latest is on the murders he's just committed…

Mr Bowling is getting away with murder. On each occasion he buys a newspaper to see whether anyone suspects him. But there is a war on, and the clues he leaves are going unnoticed. Which is a shame, because Mr Bowling is not a conventional serial killer: he wants to get caught so that his torment can end. How many more newspapers must he buy before the police finally catch up with him?

Donald Henderson was an actor and playwright who had also written novels as D. H. Landels, but with little success. While working for the BBC in London during the Second World War, his fortunes finally changed with Mr Bowling Buys a Newspaper, a darkly satirical portrayal of a murderer that was to be promoted enthusiastically by Raymond Chandler as his favourite detective novel. But even the author of The Big Sleep could not save it from oblivion: it has remained out of print for more than 60 years.

This Detective Club classic is introduced by award-winning novelist Martin Edwards, author of The Story of Classic Crime in 100 Books, who reveals new information about Henderson’s often troubled life and writing career.

Donald Landels Henderson was born in 1905; he later said, ‘I cannot pretend to have enjoyed anything very much about my childhood or adolescence.’ Henderson was an actor and combined writing with his acting career, before taking a job at the BBC, where he worked throughout the Second World War. He died at only 41, in 1947, just three years after the publication of Mr Bowling Buys a Newspaper.

Other Works by Donald Henderson