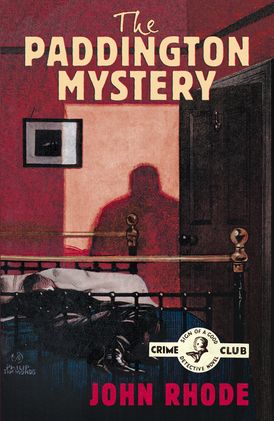 A special release of the very first crime novel by John Rhode, introducing Dr Priestley, the genius detective who would go on to appear in more than 70 bestselling crime novels during the Golden Age.

When Harold Merefield returned home in the early hours of a winter morning from a festive little party at that popular nightclub, the ‘Naxos’, he was startled by a gruesome discovery. On his bed was a corpse.

There was nothing to show the identity of the dead man or the cause of his death. At the inquest, the jury found a verdict of ‘Death from Natural Causes’ – perhaps they were right, but yet . . . ?

Harold determined to investigate the matter for himself and sought the help of Professor Priestley, who, by the simple but unusual method of logical reasoning, succeeded in throwing light upon what proved to be a very curious affair indeed.

This Detective Club classic is introduced by crime writing historian and expert Tony Medawar, who looks at how John Rhode, who also wrote as Miles Burton and as Cecil Waye, became one of the best-selling and most popular British authors of the Golden Age.

John Rhode was born Cecil Street in 1884. Although little is known about him he enjoyed a distinguised military career and was awarded an OBE. He was the author of 140 novels under the names John Rhode, Miles Burton and Cecil Wade. Cecil Street died in 1964.

Bodies from the Library 5: Forgotten Stories of Mystery and Suspense from the Golden Age of Detection

The Anatomy of Murder