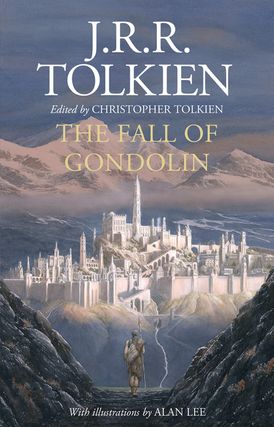 In the Tale of The Fall of Gondolin are two of the greatest powers in the world. There is Morgoth of the uttermost evil, unseen in this story but ruling over a vast military power from his fortress of Angband. Deeply opposed to Morgoth is Ulmo, second in might only to Manwë, chief of the Valar.

Central to this enmity of the gods is the city of Gondolin, beautiful but undiscoverable. It was built and peopled by Noldorin Elves who, when they dwelt in Valinor, the land of the gods, rebelled against their rule and fled to Middle-earth. Turgon King of Gondolin is hated and feared above all his enemies by Morgoth, who seeks in vain to discover the marvellously hidden city, while the gods in Valinor in heated debate largely refuse to intervene in support of Ulmo's desires and designs.

Into this world comes Tuor, cousin of Túrin, the instrument of Ulmo's designs. Guided unseen by him Tuor sets out from the land of his birth on the fearful journey to Gondolin, and in one of the most arresting moments in the history of Middle-earth the sea-god himself appears to him, rising out of the ocean in the midst of a storm. In Gondolin he becomes great; he is wedded to Idril, Turgon's daughter, and their son is Eärendel, whose birth and profound importance in days to come is foreseen by Ulmo.

At last comes the terrible ending. Morgoth learns through an act of supreme treachery all that he needs to mount a devastating attack on the city, with Balrogs and dragons and numberless Orcs. After a minutely observed account of the fall of Gondolin, the tale ends with the escape of Tuor and Idril, with the child Eärendel, looking back from a cleft in the mountains as they flee southward, at the blazing wreckage of their city. They were journeying into a new story, the Tale of Eärendel, which Tolkien never wrote, but which is sketched out in this book from other sources.

Following his presentation of Beren and Lúthien Christopher Tolkien has used the same 'history in sequence' mode in the writing of this edition of The Fall of Gondolin. In the words of J.R.R. Tolkien, it was ‘the first real story of this imaginary world’ and, together with Beren and Lúthien and The Children of Húrin, he regarded it as one of the three 'Great Tales' of the Elder Days.

J.R.R. Tolkien is best known for The Hobbit and The Lord of the Rings, selling 150 million copies in more than 60 languages worldwide. He died in 1973 at the age of 81.

Christopher Tolkien, born on 21 November 1924, was the third son of J.R.R. Tolkien. During the Second World War he served in the Royal Air Force and the Fleet Air Arm as a pilot. At the end of the war he returned to Oxford University and became a Fellow and Tutor in English of New College in 1964, lecturing in the University on early English and northern literature. Appointed by J.R.R. Tolkien to be his literary executor, he devoted himself after his father’s death in 1973 to the editing and publication of unpublished writings, notably The Silmarillion, Unfinished Tales, the twelve volumes collectively known as The History of Middle-earth, and The Children of Húrin, Beren and Lúthien and The Fall of Gondolin. In 1975 he moved with his wife Baillie to live in France. He died in 2020 at the age of 95.

Alan Lee is the illustrator of the highly-successful centenary edition of The Lord of the Rings and diamond edition of The Hobbit. He studied graphic design and the depiction of Celtic and Norse myths and has illustrated a wide range of books, including Faeries, Merlin Dreams and Castles, and was conceptual designer for Terry Jones’ film Erik the Viking. He was awarded the Kate Greenaway Medal for his illustrated edition of Black Ships Before Troy.

Sir Gawain and the Green Knight: with Pearl and Sir Orfeo