The Young Alexander: The Making of Alexander the Great 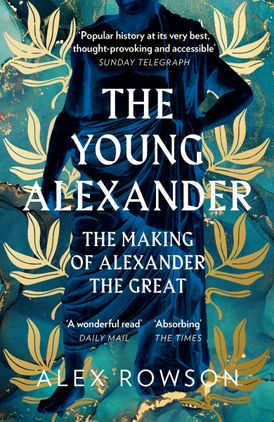 The Young Alexander: The Making of Alexander the Great

‘Popular history at its very best, thought-provoking and accessible. Underpinned by serious research, and written with panache, it summons up a vanished world’ SUNDAY TELEGRAPH

This is an astonishing new account of Alexander the Great – one of the most important figures of the ancient world, whose earlier years have until now been a mystery.

Alexander the Great’s story often reads like fiction: son to a snake-loving mother and a battle-scarred father; tutored by Aristotle; a youth from the periphery of the Greek world who took part in his first campaign aged sixteen, becoming king of Macedon at twenty and king of Asia by twenty-five; leading his armies into battle like a Homeric figure.

Each generation has peered through the frosted glass of history and come to their own conclusion about Alexander, be it enlightened ruler, military genius, megalomaniac, drunkard or despot. Yet the first two decades of his life have until now been a mystery – a matter of legend and myth. This extraordinary history draws on new discoveries in archaeology to tell the early story of Alexander and his rise – including detail on the tempestuous relationship between Alexander’s parents, Philip and the Molossian princess Olympias, his education by Aristotle and the strict military training which would serve him so well in later years. And more than ever, it emerges, the story of Alexander’s reign confronts us with difficult questions that are still relevant today – of the relationship between East and West, the legacy of colonialism and the impacts of authoritarian rule.

Drawing together startling modern archaeological discoveries, this book brings Alexander’s ancient world back into focus. With each fragment of this shattered past, excavated by shovel, pick and trowel, a new history is being written. The forgotten story of young Alexander is being unearthed.

Alex Rowson is a writer and award-winning TV producer who has worked on some of the most successful ancient history and archaeology programmes of recent times, including <i>Richard III: The King in the Car Park</i> (C4), <i>Time Team</i> (C4) and <i>Digging for Britain</i> (BBC4). As well as Greece, he has studied and worked in the UK, Italy, Peru and Egypt, and both his writing and photography have been widely published.

Other Works by Alex Rowson