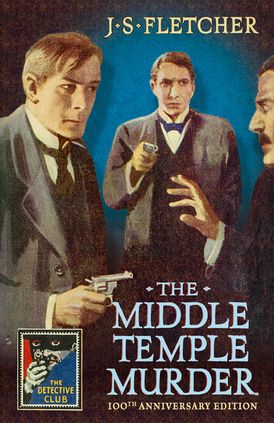 A special 100th anniversary edition of J.S. Fletcher’s best detective novel, recognised as one of the Golden Age’s earliest and most successful classic stories.

An unidentified elderly gentleman is found bludgeoned to death in London’s Middle Temple, that enclave of justice between Fleet Street and the Thames. After due investigation the police conclude that it was merely a case of robbery. But Frank Spargo, a young journalist who senses a scoop, and Inspector Rathbury of New Scotland Yard, who doesn’t, soon unearth fresh clues and join forces to solve an intricate and intriguing mystery.

Joseph Smith Fletcher was a British writer and fellow of the Royal Historical Society who had studied law before turning to journalism. Dubbed ‘the Dean of Mystery Writers’, his literary career spanned some 200 books, with the seminal The Middle Temple Murder acclaimed as one of the genre’s defining novels, popular on both sides of the Atlantic with readers, critics and US Presidents alike.

This Detective Club classic is introduced by the detective fiction historian Nigel Moss, celebrating 100 years since the book’s first publication. It includes the bonus of Fletcher’s earlier short story ‘The Contents of the Coffin’, his precursor to the full-length The Middle Temple Murder.

‘Fletcher's best detective novel and the novel that led to his great success in the United States in the 1920s’ GADetection.com

‘Ingenious, complicated and much better written than the average’ New York Times Book

‘Mr Fletcher’s mysteries are good, sound, unpretentious writing, just what they profess to be, good rattling stories of which the plot is the chief character’ The Outlook

Joseph Smith Fletcher was a British journalist, writer, and fellow of the Royal Historical Society. He studied law before turning to journalism. His literary career spanned approximately 200 books on a wide variety of subjects including fiction, non-fiction, histories, historical fiction, and mysteries. He was known as one of the leading writers of detective fiction in the Golden Age.

Other Works by J. S. Fletcher