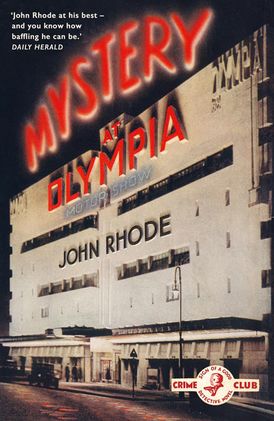 The next time you visit Olympia, take a good look around and see if you think it would be possible to murder someone in the middle of the crowd there without being seen…

The new Comet was fully expected to be the sensation of the annual Motor Show at Olympia. Suddenly, in the middle of the dense crowd of eager spectators, an elderly man lurched forward and collapsed in a dead faint. But Nahum Pershore had not fainted. He was dead, and it was his death that was to provide the real sensation of the show.

A post-mortem revealed no visible wound, no serious organic disorder, no evidence of poison. Doctors and detectives were equally bafﬂed, and the more they investigated, the more insoluble the puzzle became. Even Dr Lancelot Priestley’s unrivalled powers of deduction were struggling to solve this case.

John Rhode was a pseudonym for the author Cecil John Charles Street (1884–1964), who also wrote as Miles Burton and Cecil Waye. Having served in the British Army as an artillery officer during the First World War, rising to the rank of Major, he began writing non-fiction before turning to detective fiction, and produced four novels a year for thirty-seven years. <i>The Sunday Times</i> said ‘he must hold the record for the invention of ingenious forms of murder’, and the <i>Times Literary Supplement</i> described him as ‘standing in the front rank of those who write detective fiction’. Rhode’s first series novel, <i>The Paddington Mystery</i> (1925), introduced Dr Lancelot Priestley, who went on to appear in 72 novels, many for Collins Crime Club.

The Anatomy of Murder