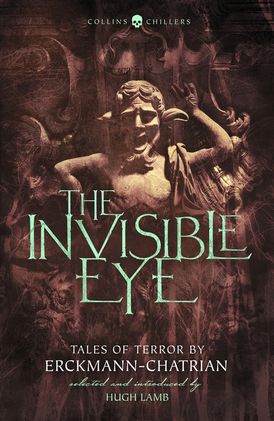 A collection of the finest supernatural tales by two of the best Victorian writers of weird tales – Erckmann–Chatrian, authors who inspired M. R. James, H. P. Lovecraft, and many others.

Emile Erckmann and Louis Alexandre Chatrian began their writing partnership in the 1840s and continued working together until the year before Chatrian’s death in 1890. At the height of their powers they were known as ‘the twins’, and their works proved popular translated into English. After their deaths, however, they slipped into obscurity; and apart from the odd tale reprinted in anthologies, their work has remained difficult to find and to appreciate.

In The Invisible Eye, veteran horror anthologist Hugh Lamb has collected together the finest weird tales by Erckmann–Chatrian. The world of which they wrote has long since vanished: a world of noblemen and peasants, enchanted castles and mysterious woods, haunted by witches, monsters, curses and spells. It is a world brought to life by the vivid imagination of these authors and praised by successors including M.R. James and H. P. Lovecraft. With an introduction by Hugh Lamb, and in paperback for the first time, this collection will transport the reader to the darkest depths of the nineteenth century: a time when anything could happen – and occasionally did.

Hugh Lamb has spent over forty years delving into weird fiction. Tired of anthologies reprinting the same old stories, he tried his hand at editing his own. His main area of research is Victorian ghost stories and he has published five anthologies of these: Victorian Tales of Terror, Terror by Gaslight, Victorian Nightmares, Tales from a Gaslit Graveyard, and Gaslit Nightmares. A freelance journalist by profession, Hugh Lamb lives in Sutton, Surrey.

Other Works by Louis Alexandre Chatrian