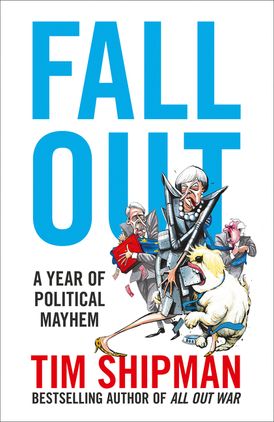 The unmissable inside story of the most dramatic general election campaign in modern history and Theresa May’s battle for a Brexit deal, the greatest challenge for a prime minister since the Second World War.

By the bestselling author of All Out War, shortlisted for the Orwell Prize 2017.

This is the unmissable inside story of the most dramatic general election campaign in modern history and Theresa May’s battle for a Brexit deal – the greatest challenge for a prime minister since the Second World War.

Fall Out tells of how a leader famed for her caution battled her bitterly divided cabinet at home while facing duplicitous Brussels bureaucrats abroad. Of how she then took the biggest gamble of her career to strengthen her position – and promptly blew it. It is also a tale of treachery where – in the hour of her greatest weakness – one by one, May’s colleagues began to plot against her.

Inside this book you will find all the strategy, comedy, tragedy and farce of modern politics – where principle, passion and vaulting ambition collide in the corridors of power. It chronicles a civil war at the heart of the Conservative Party and a Labour Party back from the dead, led by Jeremy Corbyn, who defied the experts and the critics on his own side to mount an unlikely tilt at the top job.

With access to all the key players, Tim Shipman has written a political history that reads like a thriller, exploring how and why the EU referendum result pitched Britain into a year of political mayhem.

'The doyen of … high-class gossip is … Shipman, whose All Out War was last year’s bestselling guide to the referendum campaign. Its sequel takes up where that left off … Shipman’s books are fast becoming classics … It’s testament to the rigour of [his] research that the book doesn’t feel dated despite the speed at which events at Westminster have moved since it went to press' Gaby Hinsliff, Guardian

‘This extraordinary book … reads like a roaring farce … jam-packed with fresh, illuminating details … Shipman’s writing has admirable clarity and drive … For anyone who wants to relive the past year… this book is a must’ Craig Brown, Mail On Sunday

‘All Out War was the best political book published … last year … its triumphant sequel … is even better’ Alex Massie, Spectator

‘Gripping … If journalism is the "first rough draft" of history, then Shipman is the master of the second, tidied up, version of events … A mixture of political thriller, psychological analysis and campaign diary, this is a page-turner for anyone interested in politics’ Rachel Sylvester, The Times

‘Shipman … a major-domo with a notebook in his waistcoat pocket … bends over backwards to be fair … It is crammed with detailed description and the transcribed thoughts of those who were there when the key decisions were taken’ Andrew Marr, Sunday Times

‘Excellent … engrossing … a witty phrase-maker … Shipman does a fine job of making sense of the period since the Brexit referendum … illuminating’ Andrew Rawnsley, Observer

‘Of books explaining this peculiar time, the most keenly awaited comes from Tim Shipman … he returns to his role as the chief biographer of Brexit with a worthy sequel’ Sebastian Payne, Financial Times

‘It carries on from his first book, All Out War and is just as good … I can’t give his books any higher praise than that’ Iain Dale, LBC