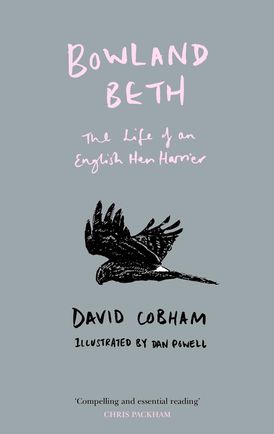 The story of the short life and tragic death of Bowland Beth – an English Hen Harrier – which dramatically highlights the major issues in UK conservation.

‘The sun was blood red as it broke the horizon and lit the communal roost where the female hen harrier had spent the night. She watched the other harriers as they left to go foraging for food out on the moor. She didn’t join them, for she had felt a quickening in her body, an urge to move to Mallowdale Pike, a rocky crag from where she had fledged nine months ago. After preening, she lifted off from the roost and soared up over the fell.’

David Cobham enters Beth’s world to show what being a hen harrier today is like. He immerses himself not only in the day-to-day regimen of her life, the hours of hunting, bathing, keeping her plumage in order and roosting, but also the fear of living in an environment run to provide packs of driven grouse for a few wealthy sportsmen to shoot.

The hen harrier is seen as a totemic species in the battle between the conservationists and ruralists, and as one of the key players in this emotive debate, David Cobham is uniquely placed to reflect on Beth’s story. In this powerful narrative, he provides us with a profound tale which helps to illuminate the larger implications of the species’ decline, highlighting the urgent need for conservation efforts to reverse this.

‘It is a good read, terrific in places, informative, engrossing and moving, with a vital message about conservation […] Bowland Beth reminds us that nature deserves to be written about with passion, power and poetry. Writers and readers have a role in protecting this country. It is time we performed it better.’ Spectator

‘Beautifully illustrated … well-written and engaging, too … a book to inspire a love of these superb raptors’ Birdwatching

David Cobham was an internationally renowned filmmaker, well known for his films Tarka the Otter and The Goshawk.

Dan Powell is a wildlife artist best known for the field guide to The Dragonflies of Great Britain. His drawings and paintings have appeared in numerous wildlife books and publications.

Other Works by David Cobham

Other Works by Dan Powell