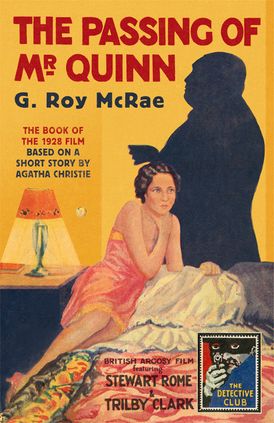 Reprinted for the first time in almost 90 years, this original novelisation of the very first Agatha Christie film is a unique record of the Queen of Crime’s movie debut and a bold attempt to turn one of her favourite short stories into a thrilling silent movie.

Who poisoned the cruel and sinister Professor Appleby? Derek Capel, his neighbour, in love with the Professor’s wife, Eleanor? Vera, the house-parlourmaid, Appleby’s mistress? Or was it Eleanor Appleby herself? All three could be reasonably suspected of a motive which would prompt them to poison the most hateful villain who ever crossed the pages of fiction . . .

The first ever Agatha Christie film was a 1928 black and white silent movie, loosely based on her first ‘Harley Quin’ story. Although no script or print of the film survives, this rare novelisation from the same year is a unique record of Christie’s first association with the motion picture industry – now in its remarkable tenth decade with the release of Kenneth Branagh’s Murder on the Orient Express.

This new Detective Club edition includes an introduction by film and television historian Mark Aldridge, author of the authoritative Agatha Christie On Screen (2016), who reveals why the film’s harshest critic was Agatha Christie herself.

‘G. Roy McRae’ is believed to be a pseudonym used specifically for the novelisation of Agatha Christie’s The Passing of Mr Quinn (1928). Nothing else is known about this elusive author.

Other Works by G. Roy McRae

Agatha Christie’s Poirot: The Greatest Detective in the World