A Right Ambition (Text Only) 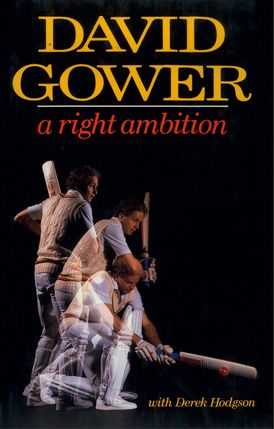 A Right Ambition (Text Only)

First published in 1986 and now available as an ebook.

Batsman of international renown, Captain of England, David Gower scaled heights other cricketers must envy. He successfully led one of the best balanced of recent English sides in a victorious tour of India in the winter of 1984/5 and returned home to win decisively the series against Australia in 1985 and regain the Ashes. There followed the more daunting task of taking on the mighty West Indies early in 1986.

A Right Ambition is an honest, forthright, fascinating self-examination by a man at the height of his sporting and intellectual powers. He discusses the art of batting, comparing his techniques with that of masters like Bradman and Boycott, and provides a basic guide to every stroke in the repertoire for a cricketer anxious to improve his game. He writes with an insider’s knowledge about some of the best bowlers in the world, such as Marshall Hadler, Abdul Qadir and Edmonds.

There are fascinating insights into the ups and downs of captaining an international team: the exciting but often fraught tour of India 1984/5, defeat in the one-day matches in Australia and then victory against Australia in 1985. The book is marked for its understanding and respect of fellow sportsmen and for this great cricketer’s deep love of the game itself.

Other Works by David Gower

Heroes and Contemporaries (Text Only)